Review It's not hard to see why Nintendo added the third word to Mario Sports Mix. A mix it is, not only of four individual sports, but two games too: Wii Sports and Mario Kart Wii. Unfortunately, the whole is less than the sum of its parts.

The North American-centric games on offer here are Basketball, Ice Hockey, Volleyball and Dodgeball, which is not a game I was forced to play at school and for some time thought was made up for a comedy film. 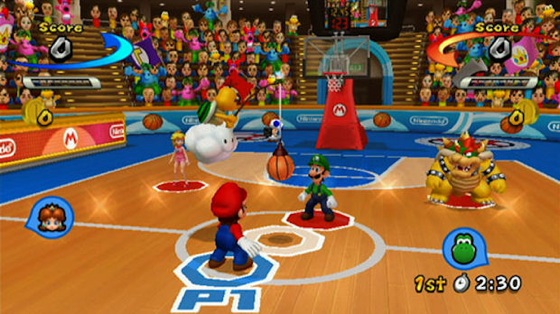 It may as well have been, so little does this - or the other games here, for that matter - resemble their real-life counterparts. These are sports filtered through the fantasy-land brain of a Japanese games developer who probably never played any of them at school either, got laughed at when he did, and may still have a chip on his shoulder because the jocks always got the girls.

A more unlikely bunch of players you will not find, but Toad's wee legs and Bowser's massive girth seem neither to hinder nor favour them. Even a Mii, which you can select as your player right away, no need to unlock the option first, looks slightly un-sporty, like a band of blokes competing against each other in a school sports day dads race.

Peach and Daisy - both clad in skimpy shorts, natch - seem the only athletic ones here. 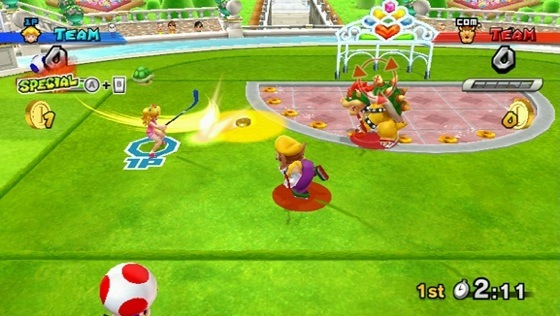 Like that other essential Japanese nerd revenge fantasy genre, the beat-'em-up, winning here is not about the rules, tactics, speed or strength, as much as hammering the controls - and, this being the Wii, waving your arms around - before hitting the special move button combos at the right time to score. Trying to remember them all is hard enough, and matching the right move to the right circumstance is even more haphazard.