But this is an old git writing, and arguably Sports Mix is really a game for kids. It's certainly too control heavy for the greybeards Nintendo also likes to target, and insufficiently violent or realistic for the 18-24 age range that forms the mass of the gaming audience. That leaves casual gamers like me, and nippers. I wasn't keen, but what about junior? 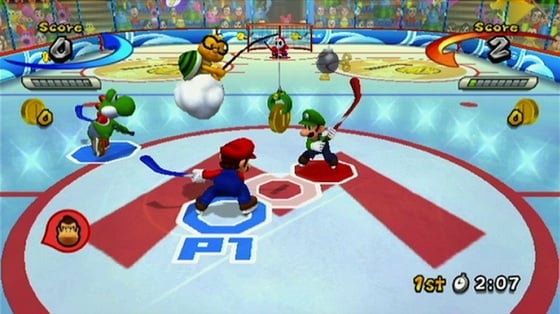 Too easy, said my eight-year-old son, who found that once he'd got the controls sorted - ah, youthful ambidexterity, I remember it well - beating the opposition was generally straightforward. He played it solidly through a weekend and hasn't been back since. Mario Kart, Star Wars Lego, Donkey Kong Country Returns - these he comes back to time and again.

Mario Kart Wii shows how good simple, lightweight minigame-style titles can be. Make it accessible, quick and fun, and the punters will love it. Nintendo and Square Enix have tried to come up with an equally successful follow-up, only to stumble onto the court, sneaker laces untied. There's some fun to be had here, particularly if you're a kid and there are more than one of you playing. But there's just not enough staying power to warrant a place in the Wii's premier league. ®

Play four sports against pals or some of Nintendo's most famous cartoon characters.
Price: £40 RRP
Page: