They did tell one chap what it's for... had to kill him, obviously

The US Air Force is set to launch its second X-37B miniature unmanned spaceplane - the type famously dubbed a "secret space warplane" by the Iranian government - on Friday. 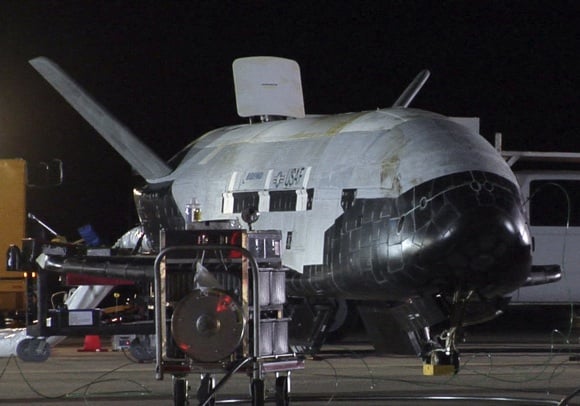 What's in the payload bay, eh?

The USAF Rapid Capabilities Office, which oversees the X-37B programme, says that the second Orbital Test Vehicle mission (OTV-2) will lift off from Cape Canaveral Air Force Station atop an Atlas V rocket, just as the preceding OTV-1 mission did, and will deploy the second of two X-37B spaceplanes currently owned by the airforce. The launch window will open at 3:39pm EST.

Once in orbit the X-37B deploys a solar panel array, unlike its bigger cousin the Space Shuttle which uses fuel cells for electrical power. Thus the little robot spaceplane can remain in orbit for much longer periods unsupported before re-entering the atmosphere to make a runway landing. The previous OTV-1 mission, carrying a payload which remains secret, lasted 224 days and ended with a successful landing at the Vandenberg military space base in California.

As yet the USAF has not revealed the planned duration of the OTV-2 mission launching tomorrow, and again details of the payload are not being revealed.

There has been extensive speculation among space watchers regarding just why the USA needs a small robotic spaceplane. For most purposes a more normal spacecraft, unburdened by heat shields for re-entry, would be more economical. Even supposing a need to return to Earth, there would seem to be no need for the X-37B's Shuttle-style delta wings, which add weight unnecessarily - a capsule design could be used, or a lifting body if runway landing was regarded as essential.

This was also true for the Shuttle, of course. The bigger spaceplane has its wings because the US military insisted that it should, in order to provide "cross range" capability - that is the ability to take off from Vandenberg and land back there after just one orbit. If this is done on certain high-angle spysat type orbits, it is very hard for anyone down on Earth to know where the spacecraft has been or what it may have done during such a flight profile.

It could even be possible, rather than dropping off or picking up spysats of one's own, that such a mission might be used to meddle with (or even snatch and retrieve to Earth, in the case of the Shuttle) someone else's space hardware. From their point of view their satellite (or whatever) would simply fail to come back around the planet again as expected.

Rumour has it that worries about the Shuttle's capability caused the Soviets to ponder a "space fighter" modified from the MiG-105 manned test craft, though the proposed "Uragan" (Hurricane) never actually came to fruition.

In the end the Shuttle never flew from Vandenberg on secretive military ghost missions: but the X-37B is already landing there, and could be launched from California too. Indeed this is to be expected, as one of the avowed goals of the project is to achieve rapid turnaround between launches.

The two X-37Bs are probably just what the USAF says they are - reusable satellites intended for checking out new technologies in space before putting them into purpose-built sats, and/or for putting something into orbit rapidly without any need to build a satellite specially.

But the facts that the spaceplane is funded from the secret, or "black", budget and that details of missions are apparently never to be disclosed - not to mention that the X-37B has already shown that it can elude the attention of watchers on the ground at least temporarily - will no doubt continue to fan the flames of speculation. And it is true that while the little ship is too small to physically snatch a foreign spacecraft the way a Shuttle might, it would be ideal for covert electronic-intelligence (or even electronic warfare) runs past other nations' sats.

Disappointingly perhaps, the objectives of the OTV-2 mission which will follow tomorrow's launch will probably not become known for a long time. ®