The second X-37B "secret space warplane" operated by the US military has successfully reached orbit at the beginning of a classified mission, whose intent and duration remain unknown. 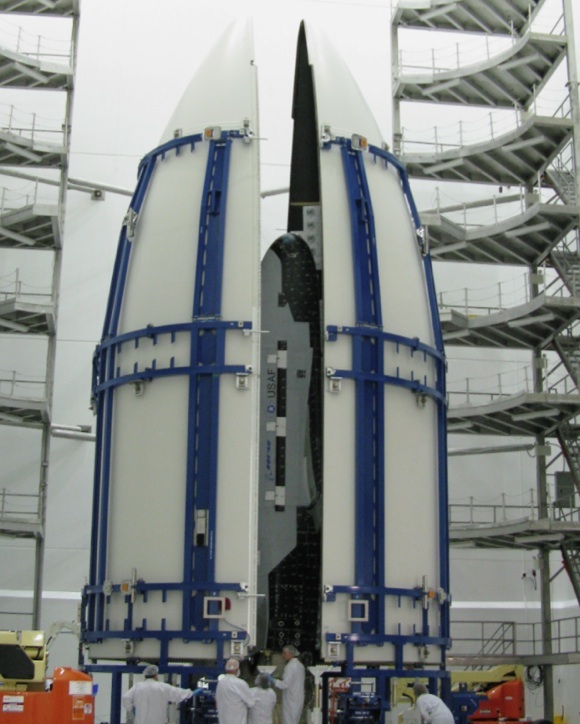 The X-37B is a small unmanned space plane with a cargo bay said to be about the same size as that of a pickup truck. It is launched into space inside a fairing atop a normal launch stack, and on arrival in orbit deploys a solar array allowing a protracted mission (a Space Shuttle, which carried a crew and used fuel cells for power, could not stay up unassisted nearly as long).

The little spaceplane features a powerful engine allowing it to change orbit as desired – and the fact that it is reusable means that its operators are less constrained to save fuel in order to prolong lifespan as they would be with a normal satellite.

Having completed its mysterious mission, the X-37B furls its solar array, closes its payload bay and re-enters the atmosphere, gliding down to land autonomously on a runway just like the Shuttle, but without benefit of any human input. Like the shuttle it has delta-shaped wings which would seem to offer the same "cross-range" capability that the US military insisted upon for the bigger spaceplane: a capability intended for top-secret intelligence missions which would be extremely difficult for other nations to monitor – though in the event the Shuttle never actually flew such missions.

The initial X-37B mission lifted off in April last year and stayed in orbit for eight months before making a successful landing at the Vandenberg military space base in California.

According to a release issued by X-37B maker Boeing at the weekend, the second X-37B has now lifted off successfully from Cape Canaveral airforce station, taking off on Saturday at 5:46pm local time.

US airforce officials in charge of the project emphasise that the X-37B has many relatively humdrum uses. It furnishes a way of getting new technologies, or ones suddenly in demand, into space quickly: rather than building a custom satellite to carry, say, a new sensor, you simply slot it into an X-37B and send it up. The little spaceplane also offers a relatively inexpensive way of carrying out tests of new kit which offers some risk of not working: if the new gadget doesn't pan out, you don't need to write off a pricey satellite – and the original gear can be tweaked, rather than you having to build a whole new rig should you want to try your idea again.

But details of missions are kept secret and the X-37B is funded from the "black" classified budget. Furthermore if a reusable plug-in satellite was all that was required, it seems reasonable to suggest that it wouldn't need shuttle-style delta wings. If runway landing were preferred to capsule/parachute re-entry, a lifting body or stub wings would be more efficient.

Given all of this, then, people such as us here on the Reg aerospace desk will continue to speculate on more exciting missions for the X-37B until we hear from an authoritative source that these are not happening. ®