Space shuttle Discovery ended its 39-mission career this afternoon at 16:57 GMT, when it landed at Kennedy Space Center. 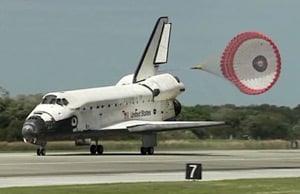 The shuttle's swansong was a 13-day trip to the International Space Station to deliver spares and the Permanent Multipurpose Module. It first launched on 30 August 1984, carrying three communications satellites.

According to initial figures provided by NASA's stats department, Discovery travelled 148 million miles (238 million kilometres) during its 365 days in space, and here's how it all ended on NASA TV: