The Commercial Times, a Chinese business newspaper based in Taipei, Taiwan, is in hot water with Hewlett-Packard this morning after reporting that the company was considering selling off its notebook PC business.

Yes, that sounds crazy, doesn't it?

If you want to subscribe to the paper, you can check it out for yourself here. Here's a screen capture of the two HP-related stories from the front page of the business section of the Commercial Times, with translation from Chinese to English compliments of Google. 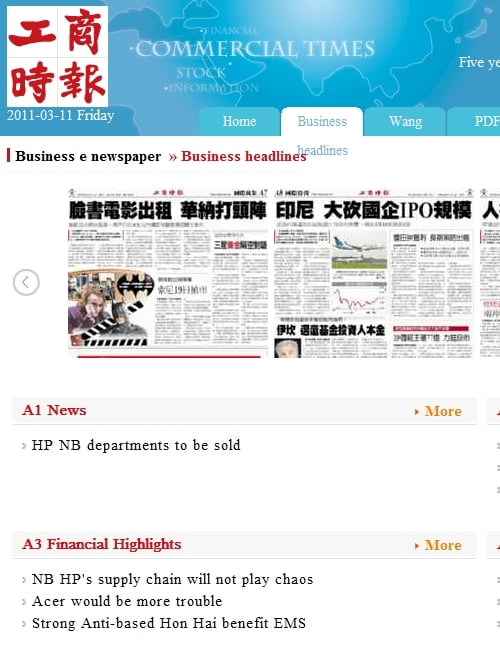 A report in the Taiwanese IT trade rag DigiTimes recaps what the Commercial Times report alleged and adds its own two Fens. The Commercial Times heard that HP had approached a number of players, including Samsung Electronics, Foxconn Electronics, and Lenovo, about buying all or some of its PC business, and DigiTimes itself said that it had heard the same rumors since the fourth quarter of 2010.

HP was having none of this. Bill Wohl, the new senior vice president and chief communications officer at HP, issued the following statement: "Irresponsible reporting by Taiwan's Commercial Times, suggesting that HP might sell its PC business, should be dismissed as market rumor and speculation. HP runs the world's largest PC business and it is core to HP’s strategy for the connected world."

It is probably not wise to speculate on speculations and rumors, but it can be fun nonetheless. The timing of these rumors coincides with new HP CEO Leo Apotheker coming on board and attempting to shake things up a bit. The HP meetings between Samsung, Foxconn, and Lenovo could have been about anything - if they took place at all - including, perhaps, putting the Linux-derived WebOS inside competitor's PCs as HP announced this week that it would be doing starting next year for its PC lineup. El Reg is not saying this happened, will happen, or should happen. But it is important to note that HP's statement above said it was not selling its PC business. It did not deny that it was talking to Samsung, Foxconn, and Lenovo - or anyone else for that matter.

There's no question that HP wants to make its PC business more profitable and make its devices more useful, and as Apple has shown, with slick design, good engineering, and marketing magic, you can take a company which, a decade ago that had an also-ran PC biz and turn it into a machine that generates more revenues and profits each quarter than IBM.

If HP was selling its PC biz to buy Apple, that my friends would be something. In this case, a fairy tale. So don't go spreading rumors that it is happening. ®