IBM hosted its annual investor briefing yesterday at the TJ Watson Research Center in Yorktown Heights, New York, which will probably go down in history as the place where the Watson question-answer machine (it is not a supercomputer, at least not yet) was built and whipped humanity's ass at Jeopardy!.

While the 20 top brass in attendance at the event gave their presentations on the mock-up of the Jeopardy! set and they made a joke here and there to the financial analysts in the stands, it was mostly seriousness as Sam Palmisano, IBM's president, chief executive officer, and chairman, and Mark Loughridge, the company's chief financial officer, laid out the plan to nearly double earnings per share between now and 2015 to $20 a pop through a combination of cost cutting, share repurchases, growth, and acquisitions.

Palmisano would be retiring this year, and that would be the centennial year for IBM if you take the June 16, 1911 founding date for the Computer Tabulating and Recording Company that was eventually renamed International Business Machines on February 14, 1924. But Palmisano's retirement seems far off in the future, particularly since no one at IBM has been anointed his successor, as Palmisano himself was by chairman Louis Gerstner more than a decade ago.

So the current configuration of IBM, in terms of the reconfigured business units and the executives running them, looks to be the team that Big Blue will be sticking with as its offensive front line. Maybe the new unofficial retirement age for IBM CEOs will be 65 when this is over. Or maybe it will be 70. Al lot will depend on how well what Palmisano and his team have planned out in meetings plays out in the real world of IT spending and the global economy that drives it or hinders it.

That plan is simple, and Palmisano made fun of himself in reviewing 2010's financials: $99.9bn in revenues, up 4 per cent; $14.8bn in net income, up 10 per cent; $11.52 in earnings per share, up 15 per cent, and gross profits up for the seventh straight year and net income, EPS, and free cash flow all setting records.

"Another record year in a tough environment," Palmisano declared. "I know it is getting boring: record, record, record." And he criticized the Wall Street analysts in the room for not quite believing that IBM could grow profits and EPS as it did in the prior ten years. Free cash flow increased from $6.7bn in 2000 to $16.3bn in 2010, and EPS nearly tripled, from $3.88 to $11.52.

How did IBM do it? Part of the picture is right here in this chart that Palmisano showed: 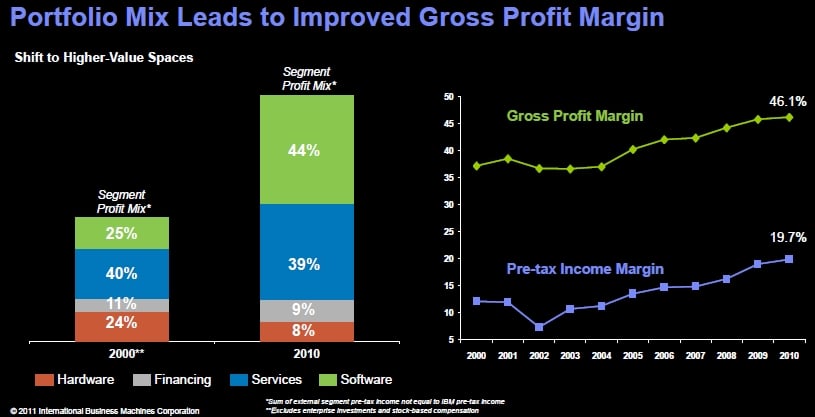 IBM's product portfolio mix, then and now (click to enlarge)

What IBM did, as we all know, is ditch the PC, hard disk, and high-end printer businesses, which generated a certain amount of revenues for Big Blue and made it a more complete IT player. But these units don't make money, and if Palmisano learned anything in all of his years of tutelage under Gerstner, it was that the job of IBM was to make money.

"The new portfolio drives a heck of a lot more margin than the commodity hardware business," said Palmisano.

So it is no surprise that IBM has gone from a computer maker to a problem solver, which is why it is increasingly difficult to talk about Big Blue as an IT supplier. Perhaps a better name for the company today is International Business Manager, because generally speaking, IBM doesn't really care much about the machines except so far as chips, servers, storage, and the software that runs on them give it entre and account control into the data centers of the world. If IBM could sell off its hardware and software business and make even more money using commodity hardware, it would have done so already. And you know it.

So IBM has spent a tidy sum buying up services and software companies--some like Cognos and SPSS, which are relatively large, but many that are much smaller but which grow fast once IBM's 400,000-strong global workforce is pushing them--and building up its expertise in specific industries and research domains while at the same time investing in its core systems.

Since the end of 2000, IBM has spent $70bn on capital expenses and acquisitions ($16bn alone to buy 50 companies), $58bn on research and development, and $107bn on share repurchases and dividends. By any standard, this is a lot of cash. And say what you will about how share buyback cash might be better spent doing something else, the financial machine that Palmisano has designed looks like it has at least five more years in it, at least as far as the IBM top brass are concerned. Here's the roadmap going forward to 2015: 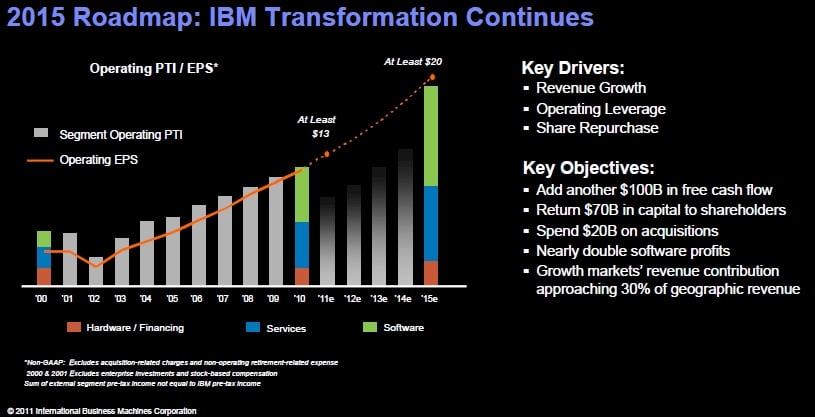 IBM's profit picture, what the CFO calls 'The Matterhorn' (click to enlarge)

IBM thinks it can create another $100bn in cash flow in five years - nearly as much as it did in the prior decade - and do all kinds of interesting things with that cash. Or, more precisely, the same old "boring" things that Big Blue has done for the past ten years. This includes spending another $20bn on acquisitions and $70bn on share repurchases (which helps drive up EPS) and dividends. IBM's plan, said Palmisano, is to double profits in its Software Group and to eventually get to the point where the growth markets - the top 20 economies on earth ranked by gross domestic product expansion - contribute about 30 per cent of its overall revenues. Those growth markets, which include Brazil, Russia, India, and China, of course - are expected to contribute about 50 percent of IBM's overall revenue growth between now and 2015.

These growth markets are where the IBM top brass spend a lot of their time. And the reason is more complicated than the fact that you can get good (and real) Indian and Chinese food there.

Next page: IBM banks on the bourgeoise
Page: