The Economics (and mixed metaphors) of Cloud Computing

In the early days of the automobile, says Microsoft corporate strategy man Rolf Harms, cars were built like horse-drawn carriages. Some manufacturers even equipped their cars with whip holders. Others attached a faux horse head. Harms calls it "horseless carriage syndrome", and he sees it as the ideal metaphor for today's cloud computing biz. 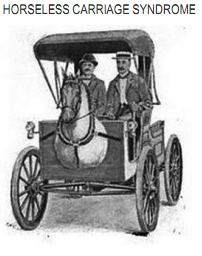 Yes, he's mixing metaphors. But bear with him. At least for a while. "When you think about a new paradigm, it's very hard to do so without putting it in the context of the existing mindset," Harms said on Tuesday afternoon at the annual Cloud Connect conference in Santa Clara, California. In the beginning, the world misunderstood the automobile, failing to realize what it was truly capable of. And now, he says, many have failed to grasp the true potential of cloud computing, pointing to Oracle boss Larry Ellison as a prime example.

Echoing a paper he published in November entitled "The Economics of the Cloud (PDF)," Harms argues that the world will ultimately move its applications onto large-scale cloud services because this makes the most financial sense. "When you make a shift to a new paradigm, if it really changes [the economics for the better], it will eventually overcome a lot of obstacles," he says. "If you have 5X improvement [in cost] ... it becomes very hard, over time, to hold onto the old paradigm."

We've heard this sort of thing so many times before, most notably from Amazon. But now it's coming from Microsoft, a company that's very much invested in the old paradigm. It's always fun to watch Redmond shamelessly follow the lead of free-thinking companies threatening to eat away at its aging business with new ideas. Inevitably, Microsoft adopts the ideas as its own, before insisting it has somehow perfected these ideas in ways its competitors never could.

According to Microsoft's official calculations, if you're running 1,000 servers on a public cloud service and you expand to 100,000 servers – with server utilization hovering around 10 per cent – the all-important total cost of server ownership drops by 80 per cent. "As you buy more capacity, your cost per capacity goes down, Harms says, attributing this economy of scale to reductions in power and labor costs, improved security and reliability, and, yes, greater buying power. The official Microsoft graph looks like this: 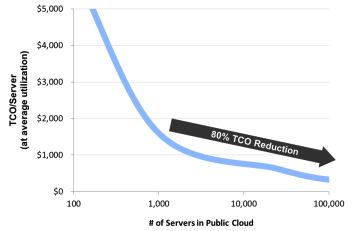 And with public clouds, Harms adds, you're not just amortizing costs across servers. You can also increase server utilization rates by aggregating demand from applications, and you can lower application-management costs and server costs per user by serving myriad users across the same infrastructure.

And he pulls out more official graphs: 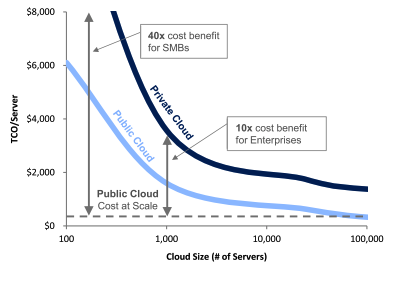 You don't even get the full benefit of a public cloud, he says, if you use the most famous public cloud: Amazon EC2, which is an "infrastructure cloud" that gives you access to raw compute resources, including virtual servers and storage. You can readily move existing applications onto the service and build new apps with almost any tool you like – but for Harms, you don't get the same cost benefit that comes with a "platform cloud", a service that juggles the underlying resources on your behalf.

Harms goes so far as to compare Amazon to an early automobile equipped with a faux horse head. "Apps should be designed specifically for the cloud. If you move your existing apps into the cloud, they don't take advantage of all the features the cloud offers," he says.

"If you're just putting applications onto a virtual machine, you're just putting a horse's head on the front of a car. That is just not the optimum way to take advantage of the cloud. ... over time, you're going to see more and more people using PaaS [platform-as-a-service] because that is the only way you can truly take advantage of all the things I've talked about."

In other words, Microsoft's corporate-strategy man believes the world should use Windows Azure, Microsoft's platform cloud. "If want to design an application and truly make it scale out, automatically go up and down in terms of managing resources, it's really difficult to do," he tells us after his talk on Tuesday. "Companies like Microsoft and Google have perfected this with our consumer services. To go on that learning curve would be very hard, and you wouldn't want to do it.

"What Paas does is it makes things a lot easier. You could do your own custom coding with IaaS [infrastructure as a service], but it's going to be so much harder."

On some level, his argument make sense. But then you realize that other parts of Microsoft are pushing the private cloud idea just as hard as the public cloud. In partnership with Dell, HP, and Fujitsu, Microsoft is building Azure applications that let users build their own Azure-like services in their own data centers. These were due to arrive at the end of last year, but apparently, they've been delayed.

What's more, other parts of Microsoft have touted the option of moving existing .NET applications onto Azure, in much the same way that you'd move existing apps onto Amazon. Microsoft has given users the option of building single-tenant apps on Azure, bypassing the benefits of a multi-tenant setup. And now, it's even offering raw VMs on Azure.

You might say Azure is also a horseless carriage.

But Harm is adamant that public cloud is the way forward. And he says that the move will help – not hurt – Microsoft's business. "You have to look at IT spending over time," he tells us. "When you have a major disruption and costs get lower, you actually see IT spending go up."

We pointed out that his views seems to contradict those from other parts of the sprawling Microsoft empire. But he pushes back here as well. "I've seen [Steve Ballmer] speak, and he advocates [the public cloud] too," Harms says. "We're going through a transition ... This thing isn't going to change overnight. But it is going to change."

Harms does mention Google as another company uniquely prepared to provide the true benefits of a public platform cloud. And Salesforce.com offers something similar with Force.com. But his colleague Matt Thompson, Microsoft developer and platform general manager, is busy telling the world that no one cares about Google or Salesforce.

So, the message from Microsoft is simple: You should you use Microsoft. As you'd expect. ®