A mysterious secret technology, apparently in use by the British intelligence services in an undisclosed role, has been reinvented by a graduate student in America. Full details of the working principles are now available. 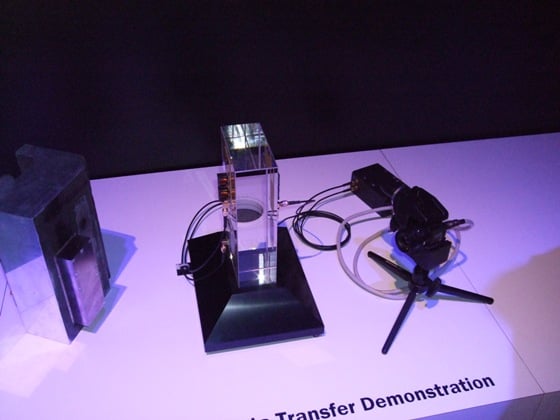 Works through glass, too.

Tristan Lawry, doctoral candidate in electrical and computer engineering, has developed equipment which can transmit data at high rates through thick, solid steel or other barriers. Significantly, Lawry's kit also transmits power. One obvious application here would be transmission through the steel pressure hull of a submarine: at the moment such hulls must have hundreds of penetrations for power and data cables, each one adding expense, weight and maintenance burden.

Regular Reg readers will recall that just such kit has previously been developed in the UK labs of arms globocorp BAE Systems: company boffins exhibited it at last year's Farnborough airshow, like Lawry suggesting that it would be of use in submarines. Intriguingly, the BAE inventors also revealed to the Reg that "other parties" within the British government – whom they couldn't name – had asked them to keep secret all details of how their equipment works.

This naturally enough led us to suspect that similar gear had in fact previously been developed in the secret labs of the UK government: the intelligence services are known to have large technical arms which occasionally invent things well before they are discovered elsewhere. The best-known example of this is public-key encryption, secretly developed by British communications spook-boffins years before being independently reinvented in US academia.

Just what the British spooks are doing with the through-metal power'n'comms gear is, of course, a secret. Nonetheless it's no secret at all that these days communications and computer systems can be remotely eavesdropped upon simply by picking up their own internal emissions: a properly-equipped van parked outside a building can snoop into electronics inside even if they make no use of wireless connections. This sort of thing is expensive and very difficult – not something that most organisations have to worry about – but serious spooks can and do carry out such operations.

This has led to the adoption of electromagnetic shielding and many other systems – for instance in accordance with the so-called TEMPEST standards – to protect systems which routinely handle highly sensitive data. Even if intruders manage to get in at some point and plant a receiver or bug inside such a room or building, it still won't be able to transmit what it picks up out through the shielding: and also its battery will run down after a while.

Next page: So how does it work?
Page:

Five accused of trying to silence China critics in US