Mind mapping for IT pros

Draw something meaningful on those whiteboards

Workshop Let’s clear up a couple of things to start with. The term mind mapping doesn’t come from a Spooks plot line. It isn’t about poking around in people’s noggins to extract secrets or reconfigure their brain. Nor is it some esoteric practice used solely by intellectuals enjoying the luxury of sitting around and thinking a lot.

Mind mapping is for people who are trying to get stuff done and who need to capture and work through a bunch of unstructured ideas and pieces of information. It is a diagramming method which taps into the visually oriented bits of your brain to help assess and reorganise whatever it is you are trying to make sense of.

The basics are not rocket science. You simply start with a central theme in the middle of the diagram and work your way outwards, adding branches and sub-branches to capture and associate items in a meaningful manner. 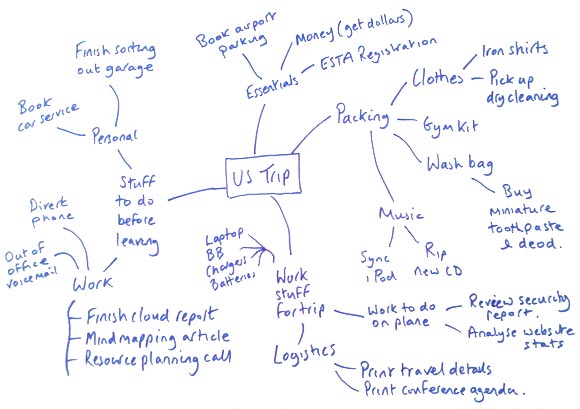 This approach is better than writing a list because ideas don’t usually come to you in the right order. When planning a trip, for example, you might think of work to be done on the plane, which reminds you to make sure your spare laptop battery is charged. That reminds you of the other things you need, which in turn brings you to packing in general. You think of your shorts and trainers for the gym, which makes listening to music on the treadmill pop into your head, and you are reminded to rip that latest CD and sync your iPod before leaving.

And so your brain continues in this associative manner. But building a mind-map as you go gives you something a bit more useful for prioritising and planning than a rambling, disordered list.

Now, think about the last conversation you had with a user or business manager about a systems problem. Try as you might to structure the conversation, the information they come up with is not in the order you would want to use it in. It’s the same in meetings and workshops. There might be an agenda, but as ideas are kicked around and people feed off each other’s comments, the session can bounce around all over the place.

Mind mapping in situations like these can be very effective. And when faced with complex sets of input, it helps to use software to build the initial map. Not only can it make data capture more efficient, but it can optimise the structure. Unlike when you are using pen and paper, you can reorganise a soft map very quickly by dragging and dropping. This can be extremely useful if, for example, you record something in the wrong place or decide to combine two branches or split one in two.

The software-based approach is particularly good for mind mapping in a meeting, particularly if it is a workshop. Projecting a map onto a big screen or monitor, or sharing it through a web conference, that on its own is useful to capture information. Collective decisions can be made based on that input and everyone leaves the meeting with a consistent view.

The following map, for example, shows what might result from an IT team getting together with a couple of business stakeholders to consider a possible move from an in-house to a hosted email solution. After everyone has had their say, the discussions are reorganised into IT considerations, business considerations and, because IT people generally like to think ahead, implementation practicalities. 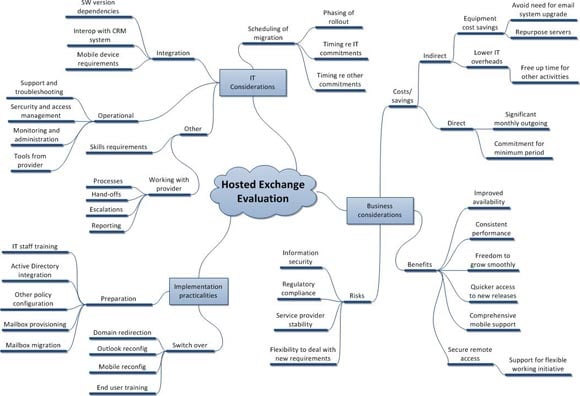 As in this case, the initial view produced is often far from perfect, but it is a much better starting point than a list of minutes presented in the order in which things were discussed.

The chances are you will be able to identify many situations in which you find yourself going through a similar process of capturing, structuring and communicating information – from requirements gathering through to business case, project planning, impact analysis and troubleshooting.

You do not need specialist packages to get going on this technique pretty easily. The above diagram for instance, was produced using Visio, which many IT professionals already have access to. The example given is quite a simple working map, but any item on the diagram can be linked to other documents and information sources, and anything on the map can be embellished with graphics, icons and other visual enhancements.

There is a limitation, however: no matter how hard they try, some people struggle to construct mind maps. It’s simply the way their brain is wired. But the majority can happily consume information in mind-map form, particularly if they are talked through it.

So, if you haven’t done so already it might be worth just firing up the relevant template in Visio, or downloading an evaluation copy of one of the many mind-mapping tools available out there. We’d be interested in hearing about your experiences.

There is a wide range of mind mapping software to chose from, (free, cloud-based and proprietary). Apart from Microsoft Visio and OmniGraffle (Mac) some of the leading tools are:

Getting your head around mainstream mind mapping

AMD's had a horrible 2016: Never mind, it lost slightly less than half a billion this time

El Reg sits down to code with .NET for Linux and MySQL, hitting some bumps along the way

Hands On Visual Studio, ASP.NET Core and Linux: Some tension

Say what? Another reCaptcha attack, now against audio challenges

unCaptcha is the sound of security crumbling

GDPR stands for Google Doing Positively, Regardless. Webpage trackers down in Europe – except Big G's

Wait.... this wasn't in the script