Eager to see Apple no longer the world's biggest seller of tablets? The good news: it'll happen. The bad news: not until 2014 at the earliest.

So says market watcher DisplaySearch, albeit indirectly. Today, it issued its forecast for the touch-sensitive panel business through 2016.

There isn't a 1:1 correspondence between touch panels shipped and the number of tablets based upon them that will ship, but it's close enough, especially when you're dealing with what are, in any case, just forecasts.

DisplaySearch has handily segmented shipments to Apple from touch panels going to everyone else. 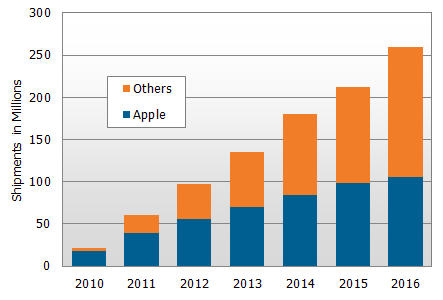 A close look at the researcher's chart shows that the blue bars don't become smaller than the orange ones until 2014. Apple-oriented shipments don't fall significantly below those made to the iPad maker's rivals until 2016.

DisplaySearch said it expects 260m tablet-oriented touch panels to ship in 2016. So that means Apple will still ship around 107m iPads that year - or $64.2bn worth of product, assuming the prices don't change and last year's average sales price of $600 per iPad remains constant.

That's unlikely, but however you tweak the numbers, Apple is left making big money selling iPads - assuming, of course, DisplaySearch is correct in its forecast. ®