In the meantime, Greenqloud is following in the footsteps of some of its Icelandic neighbors, and turning to a more official form of certification to cement its green creds.

The startup is working to achieve its ISO 14001 certification for energy management, which is also used by national power utility Landsvirkjun. ISO 14001 helps companies set up and comply with a framework that reduces their negative impact on the environment.

"For us, it means that we can prove in a standardized way that we have a sustainability policy that tracks our environmental progress through measured objectives and certifies our use of 100 per cent renewable energy and also that all stakeholders in Greenqloud are upholding that sustainability policy," Hrafnsson says. "In business terms, it means that enterprises that are ISO 14001–compliant today can more easily trust us to keep their own environmental commitments." 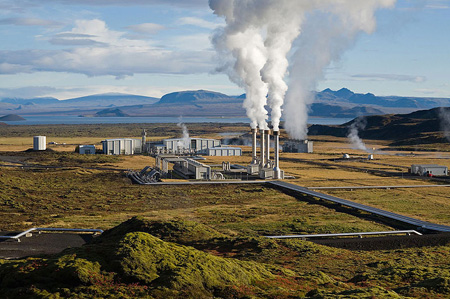 The Nesjavellir Geothermal Plant serving the Reykjavík area, home to Greenqloud and Thor

ISO 14001 certification is important to Hrafnsson because he hopes to build a network of partners and affiliates under a program he's calling Truly Green, in which partners will get a trademark they can display on their sites, and use that rating to "get revenue for attracting other like-minded people to Greenqloud," Hrafnsson says. "We are looking for partners who can follow that sustainability policy using only renewable energy – we hope to grow very fast to other platforms."

Ahead of this affiliate program, Greenqloud is putting the final touches on its cloud. Next month's launch comes after about two years' work, and follows the realization by business and government leaders in Iceland that the country's abundant supplies of naturally generated electricity could attract data center start-ups. Before Thor, data centers on the island had been private affairs run largely by the likes of banks.

The Thor data center is among the first in a new generation of commercial service providers setting up shop in Iceland. Opened in May 2010, Thor arrived after a PricewaterhouseCoopers report on the feasibility of a local data-center industry, the laying of a 5.2Tb/sec cable from Iceland to Denmark with connections to Amsterdam and London, and a change in Iceland's VAT laws to favor the purchase of data-center equipment.

Jan Ziervogel, a partner in the business and government consortium Green Data Island, which is focused on attracting data centers to Iceland, told us that startups are being won over by the prospect of low costs. They're using less power associated with cooling, and that power is competitively priced. Iceland's national power provider Landsvirkjun is a member of Green Data Island.

Greenqloud's servers will run in what Thor calls its Performance Optimized Data center, or POD, with more PODs added as the service grows. The facility has been built to withstand the island's trademark volcanic and seismic activity: Thor sits on top of a bunker-grade plate more than two feet thick, the PODs rest on shock-absorbing stabilizers, and the facility has high-grade air filters that are regularly cleaned and replaced to keep out that pesky volcanic dust. Thor and Green Data Island both say that there was little disruption from Eyjafjallajökull last year, and another Thor resident, the proxy-feuled Opera Mini browser service, continued without interruption.

The servers being used by Greenqloud run a customized version of the open source KVM virtualization layer on boxes powered by 8- and 12-core AMD Opteron 6100s, with a clustered file system designed to remove points of failure, enable high-speed data transfer rates, and let Greenqloud deliver new types of service.

The company is planning to offer shared drives between virtual machines, offering a kind of NAS or NFS from its clustered file system, with servers connected with up to 40Gb/sec Infiniband. At the network layer, the VLAN is filtered to provide completely isolated networking for users who can also upload and create an image using their own installation DVD or CD.

Hrafnsson says he began building Greenqloud because he was frustrated with the overselling of cloud computing services in Europe, where he worked in government IT at the time. "Until two years ago it was total crap – it was virtualization being marketed as cloud. That's not cloud – cloud needs to be really scalable and have APIs and be manageable," he says.

It remains to be seen how well Hrafnsson can sell his green dream – or, for that matter, effectively argue its importance. After all, green computing might make us feel better as an industry, but the problem is that computers still run on electricity. And cloud computing – like carbon offsets – only makes the problem somebody else's, especially as most service providers are drinking from a power well that's tainted by power stations burning fossil fuels.

Hanging on the line

Further, it could be the same geography location helping produce so much green ‘leccy that deter potential customers from jumping on board.

The challenge for any service provider sitting so far north on an island is network latency – the speed at which the bits and bytes move. That translates into responsiveness of an application once a user has clicked their mouse. Latency can be increased by where your servers are housed and the speed of network connection attaching them to your users.

Iceland’s not just isolated - Thor and Greenqloud are about 1,170 miles from London and 2,590 miles away from New York City - but Iceland's lacking the fist fulls of high-speed network infrastructure from service providers that are the hallmarks of the counties where rivals have set up shop.

That recently laid 5.2Tb/sec cable, named Danice, is the most recent effort to try and address this last point by juicing Iceland’s connection to the computing world. It’s also the biggest push so far. Danice follows the 160Gb/sec Greenland Connect cable in 2009, 720Gb/sec Farice-1 in 2004, and 5Gb/sec Cantat-3 in 1994. Hibernia Atlantic announced plans for a high-speed cable in 2007 but a company spokesperson told The Reg for this article the project had not yet been completed.

At minimum, Greenqloud promises the option of a cloud whose fallout won't be damaging to the planet – just to its competitor's claims. ®