LibreOffice came about last year when the majority of OpenOffice developers, concerned about the future of the project under new owner Oracle, broke away. The Open Document Foundation forked the OpenOffice code and rebranded it Libre Office.

Fedora, Red Hat and Ubuntu are also jumping ship to the new LibreOffice, making it, in effect, the new default office suite for Linux, but openSUSE gets the distinction of shipping it first.

At the moment the LibreOffice fork of OpenOffice isn't radically different from its older sibling, though you will find a few new features in this release, including a new, improved search bar and a revamped print dialog. The best news though is that, for now at least, most OpenOffice plug-ins seem to still work with LibreOffice. That may change as time goes on and the two projects move further apart, but hopefully, with the majority of the Linux community moving to LibreOffice, plugin developers will follow suit.

The latest version of openSUSE also sees Firefox 4, still a beta at the time of writing, as the default web browser. The Firefox 4 beta was stable enough, though in some cases your favorite plug-ins might not yet be updated. If Firefox isn't your bag, Chromium, the open source version of Google Chrome, is available in the main contrib repository. 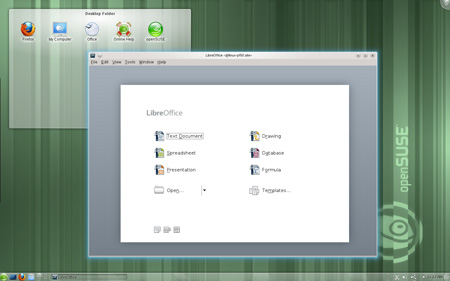 Other GNOME apps have also been updated to the latest stable versions including the latest releases of Banshee, openSUSE's default music app, Evolution, the default mail client and F-Spot, which - despite the popularity of Shotwell in other distros - remains the default photo application for openSUSE 11.4. OpenSUSE throws in a few extra apps as well, like GIMP and Inkscape for graphics work and the very handy GNOME Do for launching applications and searching for files.

openSUSE 11.4 includes the updated Linux kernel, version 2.6.37, which brings several new features including multi-processor support for the ext4 filesystem, openSUSE's default. Provided you have a dual-core machine, the new kernel should bring a significant speed boost, particularly when transferring large files. The new kernel also brings the usual spate of new hardware drivers, including drivers for some new input devices from manufacturers like Wacom.

Installing openSUSE from the DVD was a breeze, easier in fact than installing Windows 7. Thankfully openSUSE automatically sets up disk partitions, the one installation task that often confuses Linux newcomers. When it comes to speed, this release is no slouch, both the GNOME and KDE desktops were snappy and well stocked with all the default apps most users would ever need.

On the GNOME side there is the peculiar menu-bar setup that may throw off users coming from other distros. Rather than the typical GNOME menu items on the top bar, openSUSE ships with its own custom GNOME menu that cops the look and function of the Windows start menu. Fortunately, a few preferences tweaks and you can have the typical GNOME menu bar in the top menu bar.

OpenSUSE also proved particularly snappy in virtual machine, even with very little RAM (512MB). In fact it was difficult to tell that it was a virtual machine, not a native installation. OpenSUSE is also aware of when it's running in a virtual machine and will automatically install a set of virtualized drivers for improved performance.

Overall openSUSE 11.4 offers a stable, fast user experience regardless of the desktop you use. The speed, coupled with some nice new applications for both KDE and GNOME, will make 11.4 a worthwhile update for any openSUSE fan. ®