Apple's iPad 2, launched last Friday, has already been subjected to teardowns by the intrepid vivisectionists at iFixit, UBM TechInsights, and Chipworks, who have discovered details of its A5 processor and other chips, a trio of "massive" battery cells, and a total of 31 magnets providing the sticktuitiveness of the tablet's Smart Cover: 10 in the iPad 2 and 21 in the cover itself.

"In the last 24 hrs our lab guys have torn down the iPad 2 and come to the conclusion that the main innovation is the A5 chip," a Chipworks tech writes in a post on the company's Technology Blog, subtly taking issue with Steve Jobs' claim that the new but presumably still "magical and revolutionary" fondleslab is an "all-new design".

"Flash memory is flash memory," the post continues, "the DRAM in the A5 package is 512 MB instead of 256 MB, and the touchscreen control uses the same trio of chips as the iPad 1 – not even a single chip solution as we've seen in the later iPhones."

The new A5 chip, Chipworks discovered when it removed the substrate silicon of the nine-layer, 45-nanometer part, is indeed a significant upgrade of the previous 'Pad's A4. 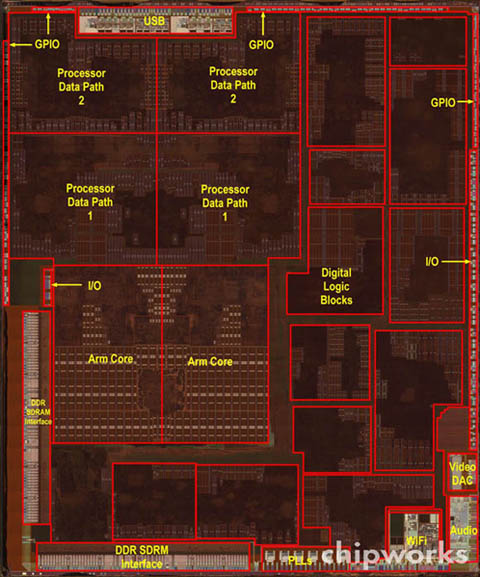 The iPad 2's A5 chip is bigger and burlier than the original iPad's A4 (image: Chipworks – click to enlarge)

Chipworks also came to the conclusion – by using a scanning electron microscope to study the A5's transistor layout – that the chip is fabricated by Samsung, maker of the Galaxy Tab competition, and not by TSMC, as some had previously thought – a conclusion with which a UBM TechInsights engineer agrees, according to AppleInsider.

When iFixit tore into the iPad 2, it also discovered chippery similar to the original iPad: the same Broadcomm and Texas Instruments touchscreen controllers, for example. Chipworks also notes that the 3G version of the iPad 2 "uses the same chipset as the Verizon iPhone launched a few weeks ago."

Check out iFixit's teardown for a full description of each color-coded iPad 2 chip (image: iFixit – click to enlarge)

Unfortunately, the battery cells are "very securely stuck down to [the iPad 2's] rear case," according to iFixit – one of the reasons that the tablet received a 4-out-of-10 "Repairability Score" from the parts, tools, and repair site. 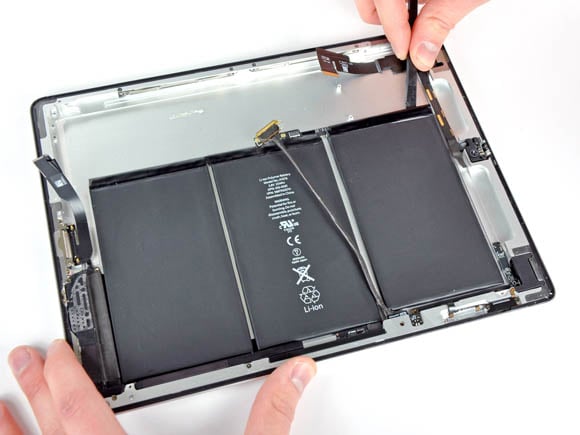 Speaking of repairability, iFixit also tore apart one of the iPad 2's new magnetically attached Smart Covers. After slicing it up to free its 21 magnets, iFixit – tongue thrust firmly in cheek – gave it a Repairability Score of 0-out-of-10. ®

In addition to taking apart the A5, Chipworks also took apart Apple's PR machine. Last week, they produced solid evidence that the promo photos of the A5 that Apple used were actually those of an A4 with a bit of Photoshopping to upgrade them to the A5 logo.

As Chipworks wrote at the time: "Oh, deary me, methinks we’ve caught Apple out. What a tangled web we weave, when first we practise to deceive ... (Walter Scott, 1808)"