The story of the quake- and tsunami-stricken Fukushima Daiichi nuclear powerplant continues to unfold, with reports suggesting that the situation with respect to the three damaged reactors at the plant may soon be stabilised without serious consequences. The focus of attention has now moved to problems at a pool used to keep spent fuel rods cool. There remain no indications that anyone has yet suffered any radiation health effects, and the prospect is growing that this will remain the case. 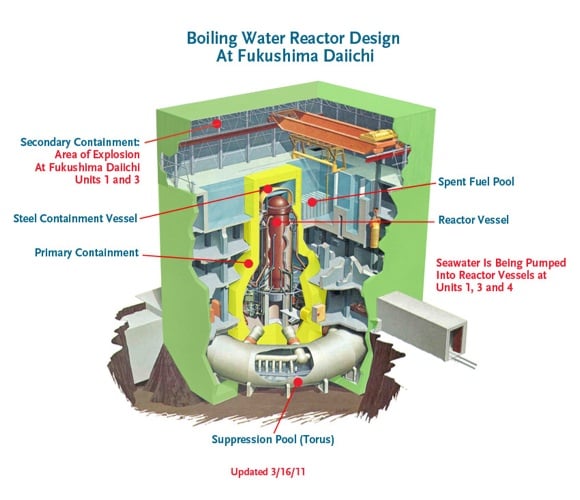 Picture for layout purposes - ignore the out of date situation

The storage pool now at centre stage in the incident is a deep steel and concrete lined structure situated high up in the building housing the site's No 4 reactor. It is placed there for easy access when fuel rods are taken out of the top of the core. Spent fuel rods continue to generate heat for some time when removed from the reactor, and are placed in such pools to keep them cool, so preventing possible damage from their own internal heat. The water also blocks radiation emitted from the rods.

The No 4 reactor was shut down when the quake hit, and its fuel had been removed and placed in its pool. Storage pools need cooling pumps to operate if the water is not to heat up and eventually evaporate, but the levels of heating are comparatively low: normally, loss of cooling at a pool would not cause any problems for "a few weeks", according to the Japanese Nuclear Energy Institute (pdf).

Despite this, the No 4 building was hit by an explosion two days ago, which appeared likely to have been caused by a hydrogen gas buildup. As the No 4 reactor was un-fuelled, the only plausible source of hydrogen there would be steam reacting with the alloy casings of spent-fuel rods, suggesting that rods or parts of them are exposed above the water level.

Though the heating in spent fuel rods is hugely less powerful than that inside a reactor core, the situation is dangerous because the pools are not inside heavy overhead shielding as reactor cores are. If the spent fuel rods get really hot and start to melt, material from them will have a much easier path into the air than exists from the damaged reactor cores at the site.

Fears have been stoked by statements made by US Nuclear Regulatory Commission (NRC) chairman Gregory Jaczko in Washington yesterday, having spoken to an NRC team in Japan assisting with the incident.

"My understanding is there is no water in the spent fuel pool," Jaczko told reporters. "I hope my information is wrong."

Plant operator TEPCO has continued to suggest that the explosion and subsequent fires at No 4 may have had other causes than hydrogen and that the pools there and at No 3, while likely to have lowered water levels, are not in an urgent condition. Under this theory the high radiation levels seen near units 3 and 4 results mainly from steam venting from the core at No 3.

According to the Japanese Nuclear Energy Institute:

Even if the water level in the pools was to decrease sufficiently so that the fuel were exposed to air, the same level of overheating that can occur in a reactor accident would not occur in the used fuel pool because the used fuel assemblies in the pool are cooler than the assemblies in the reactor. It is highly unlikely that used fuel temperatures could reach the point where melting could occur, although some damage to the cladding cannot be ruled out.

The Japanese authorities and TEPCO nonetheless agree that getting more water into the spent-fuel pools at No 3 and No 4 is now their highest priority. Military helicopters have been used to dump water onto the top of No 3, whose roof has been blown off by previous hydrogen explosions: with the pools situated just below the roof area, it's hoped that some water at least went where it was wanted. High levels of radiation above the buildings had earlier caused the aircraft to be held back.

Next page: Helicopter water dumps not having much effect
Page: