Review Looking more like a router than a PC, Sapphire’s Edge-HD makes the recently-reviewed Zino HD 410 from Dell look positively huge. Sapphire rather hesitantly states that it “believes” the Edge-HD to be the smallest PC in the world. Whether or not it’s a world-beater is therefore up for debate, but with dimensions of 193 x 148 x 22mm it most certainly is small. 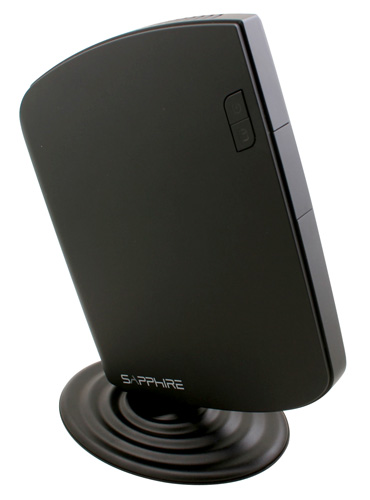 Sapphire’s EDGE-HD: not an AMD component in sight

The Edge-HD has obvious appeal as a home theatre PC, but Sapphire appears also to be aiming it at the corporate market, citing its space-saving design and green credentials. When I hooked it up to a power meter, I recorded a nice low power draw of 21W – for reference, Dell’s Zino HD 410 mini PC consumed around 40W.

With the aid of a detachable stand, the device sits upright, leaning back at a slight angle. The stand is also impressively sturdy, and you’ll have to give the PC a fair old whack for it to topple over. A vent at the top belches out hot air, with the fan constantly whirring quietly away – you’ll only hear it in a near-silent environment. As far as controls go, the EDGE-HD has just one: a power button. Next to this sits what looks like another button, but it is in fact just a HDD activity LED indicator.

The rear is home to analogue audio I/O and LAN ports, along with VGA and HDMI outputs – an HDMI cable along with an HDMI-to-DVI adapter are included in the package. Two USB ports are also found at the rear, but they’re crammed in so close together that a bulky USB device (such as a TV tuner) may well block off the neighbouring port. 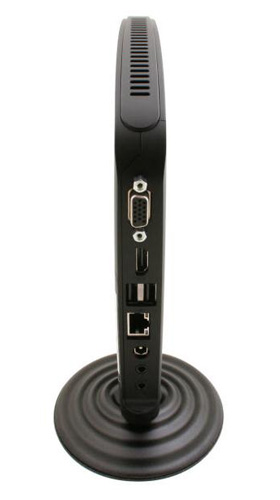 Aside from two USB ports at the front, all the action’s at the back

A small flap at the front of the PC reveals another pair of USB ports. Personally, I’m not a fan of rubberised flaps such as this – they’re fiddly to use and look wholly unattractive when opened up. Perhaps more concerning, however, is the lack of a card reader, meaning an external one will be required if you want the ability to quickly show off a card full of snaps.