Hewlett-Packard is moving its NonStop fault tolerant database and operating system up to the latest "Tukwila" Itanium 9300 technology from chip partner Intel.

The quad-core Itanium 9300s were launched by Intel back in February 2010, and HP revamped its Integrity blade servers to make use of these chips and to allow for them to be snapped together in two or four units to make SMP servers using the extra QuickPath Interconnect (QPI) buses on the Tukwila chips. The base Tukwila-based Integrity blade debuting back in April 2010 was the BL860c, a two-socket blade with a dozen DDR3 main memory slots. When you snap two of them together with the SMP port (which is external to the blade on the front of the chassis), it becomes the BL870c i2, and when you link four of them, you get the BL890c i2.

With the Integrity NonStop, HP plunks a NonStop ServerNet card into the mezzanine slot that would normally have a Gigabit, 10 Gigabit, or InfiniBand networking adapter. This ServerNet, along with the NonStop kernel, is what makes the system fault tolerant. As was the case with the prior Integrity NonStop NB50000c blades, based on the dual-core Itanium 9100s and announced back in June 2008, the new blade only has one processor socket of the two on the blade populated when it runs the NonStop kernel and relational database. It has to do with the balance of I/O across the blades, which are linked into nodes and then clustered into systems by ServerNet.

Not everyone wanted blades in the NonStop world, so in March 2009, HP put out the NS2000 rack server to run NonStop, which was clustered into logical nodes using ServerNet and then further clustered into fault tolerant systems. 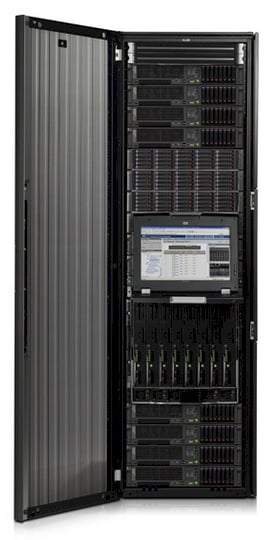 The three other Itanium 9300 chips, which run slower and cooler than this 185 watt part, are not certified for use in NonStop configurations. The base NB54000c blade comes with 16 GB of main memory, expandable to 48 GB. HP has only certified 4 GB memory sticks on the blade. There is no point in adding the second socket of processors and beefing up the node with lots of memory since the whole point of a fault tolerant cluster is to have lots of nodes doing a modest amount of work.

The NB54000c blade plugs into the same BladeSystem c7000 chassis that regular ProLiant and Integrity blade. The blades support SAS 2.0 disks, which offer more throughput than prior generations of drives uses in the system. The minimum configuration of a NonStop blade box has two blades and a single logical node can scale up to 16 blades. Up to 255 of these logical nodes can be linked together using ServerNet for a total of 4,080 nodes for a total of 16,320 cores. The NonStop system can support up to 192,000 program processes per node and just under 49 million across the fully expanded ServerNet network. That's plenty of headroom, with the typical large NonStop customer sporting somewhere between 2,000 and 3,000 cores in their clusters.

Bob Kossler, director of strategy and planning for the NonStop line in HP's Business Critical Systems division, tells El Reg that an entry two-blade system with the NonStop kernel and database plus memory, disk, ServerNet links, and networking to the outside world costs somewhere between $100,000 and $200,000. Yes, that is mainframe-class pricing, and that is because Tandem products (no matter whose brand is on the front, Compaq or HP) offer mainframe-class availability and I/O scalability.

That price includes a slight uptick for the software stack and about the same price for the hardware stack, and customers whose workloads are not cache sensitive are seeing more than a 2X performance boost moving from the dual-core Itanium 9100 to the quad-core Itanium 9300 blades. That is close to twice the bang for the buck for the typical NonStop shop, which is about what you would expect over a three-year product cycle.

You may have written the NonStop server business off as being a totally niche product, but HP has not. In the wake of the acquisition of Compaq by HP the NonStop business declined, just as IBM's System z mainframe did, but Kossler says that the business actually recovered in the years following the dot-com bust. And while the NonStop business took some lumps in the Great Recession, Kossler is optimistic about the future, and not just because the IBM mainframe is on the rebound in recent quarters.

"This is a solid business," says Kossler. "As the financial services sector recovers, we expect to get growth. We have already seen good growth among our telecom provider customers - those iPhone and iPads are a curse for network operators and a blessing for both us and them."

Kossler says that there are not many of the pre-Integrity NonStop S generation of machines out there in the world, but there are still a few. And unlike the server market at large, the NonStop base is really taking a shining to the blade versions over the rack versions. More than half of HP's NonStop sales are for blade versions now, which compares to about 15 per cent for the server market at large these days. ®