iGamer That's it, hands, you deserve a break. You've worked tirelessly these past few weeks and proved your mettle.

Dead Space and Rainbow Six: Shadow Vanguard were enjoyable iOS games, but playing them back-to-back was far too much like hard work. These fingers are done playing digit-Twister for a while. Time for a holiday. Time to hit the slopes. Time to play iStunt 2. 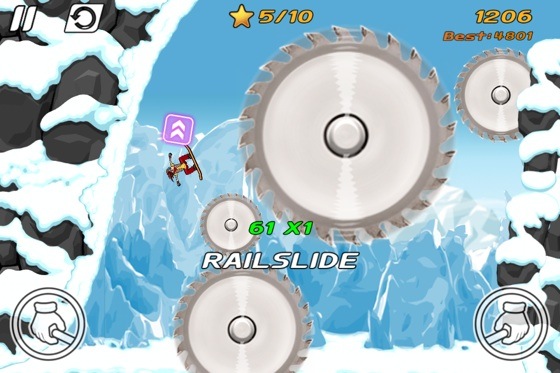 Miniclip's port of its popular Flash title is a timely reminder that the best mobile games are often the least complex. A comfortable fit for the platform and audience, unlike those recent technical showcases, iStunt 2's ambitions haven't been shoehorned into the iDevices at the expense of simplicity: just two buttons, two swipes and the gyroscopic tilt control your snowboarder.

But while the inputs may feel laid back, the physics-based gameplay is anything but.

The game soon ramps up the difficulty, though. Speed boosts and rails inject urgency and giant buzzsaws increase the peril, but it's gravity that really takes iStunt 2 off-piste.

Gravity switches flip the world on its axis so fast even Shaun White would get a nosebleed. Up and down become fleeting conventions, landing upright a quickfire test of spacial awareness. The challenge is taxing enough when combating the physics alone, but iStunt 2's scoring system cleverly promotes recklessness. 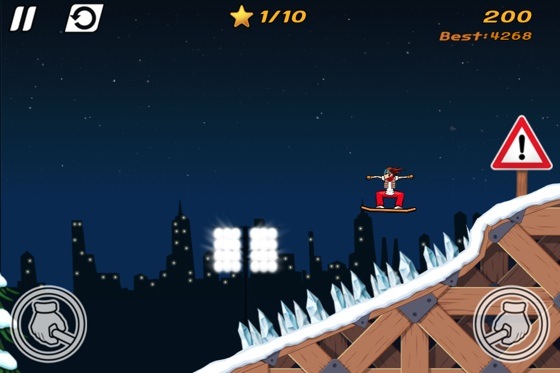 The lure of a gold trophy and the kudos of fully-integrated Gamecenter leaderboards constantly goad you to pull off insane tricks while punishing every over-ambition with a crumpled, ragdoll death. And the extra enticement of ten collectible stars per level adds an additional layer of replayability.