In the town of Bayeux in northern France you can see the world's oldest information archive based on a long ribbon of material, a very early example of what was to become tape media.

The 1000-year-old Bayeux Tapestry, actually an embroidery on a fine linen background, depicts a sequence of scenes telling the story of the events which led up to the Norman invasion of England in 1066 by William, the illegitimate son of Robert the Magnificent, Duke of Normandy, and his defeat of the perfidious British ruler Harold Godwinson, at the battle of Hastings. The historical accounts have it that Harold died from an arrow penetrating his eye, a fate said to be the appropriate one for people who break a sworn oath. 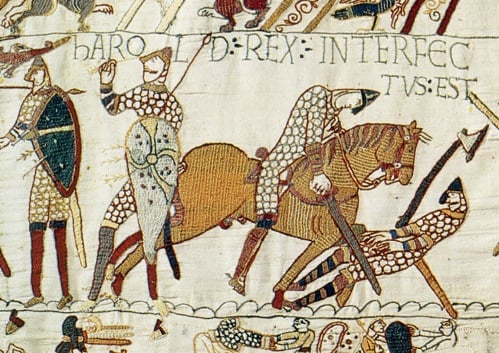 William's half-brother, Bishop Odo, was involved in the events and apparently commissioned the tapestry to ornament Bayeux Cathedral, which he also commissioned. The supposed idea was to string the long tapestry around the nave of the cathedral at the time of its dedication, and so enable cathedral attendees to understand the sequence of events and the personalties involved in the Norman conquest of England.

It is not a tapestry created to glorify God and display religious themes. Instead it is an account in Latin and pictures - almost comic book in style although very serious - of a state campaign, a just war in which the French regained what was theirs by right, as they saw it. The English King, Edward the Confessor, having no heirs, sent Harold, then England's most powerful earl, to Normandy to tell William that he was Edward's appointed successor. Harold did so, swearing to the truth of this on relics. But when Edward died, Harold had himself crowned king of England.

Harold's story is different: it has been chronicled that he said he was shipwrecked in Normandy, and didn't realise he was swearing on relics.

Halley's comet appears, a portent of doom. William hears the news of Harold's coronation, builds a fleet of ships, crosses the English Channel with his army, and fought and won the Battle of Hastings a few days later on 14 October, 1066.

Bayeux Tapestry as an information archive

Our understanding is that the Tapestry features 45 to 48 threads per inch which gives us a resolution approximating 47dpi with a colour depth of 8, ignoring later repairs. Thus, in information terms, the tapestry contains 2.429MB of information, assuming 1-bit per colour, 47dpi, and a 51,678.72 square inch surface area.

From the writing point of view it took ten years for English (Saxon) seamsters, seamstresses or embroiderers to write this 2.429MB of data, which must be some kind of record. Assuming an eight-hour, 350-day working period for these ten years, that implies a write bandwidth of 10.84 bytes/hour; a spectacularly slow data rate in information transfer terms.

What makes it worse is that there were multiple parallel write heads - seamsters or seamstresses - and we could envisage a team of five on average, meaning each write head in this theoretical Bayeux Tapestry archiving model wrote at a rate of 2.168 bytes/per hour (17.344 bits/min). A truly amazingly poor information write bandwidth from our IT viewpoint, but a blur of flickering needles and fingers seen from the embroiderers' seat.

If we think that needle rate is too high we can always increase the size of the embroidery team. 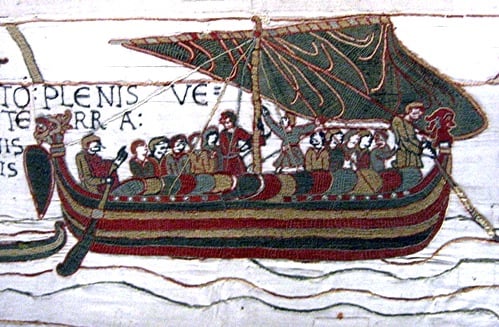 From the endurance point of view the Tapestry has lasted almost 1000 years - an amazing record. The vegetable dyes used to colour the threads have kept their colour for nearly one hundred decades, and the woven cloth fabric has kept its structural integrity for the same time period despite several instances of mistreatment. Who says ribbons of "TAPEstry" are unreliable?

You can see the tapestry at the Musée de la Tapisserie de Bayeux. Bayeux Cathedral itself is not nearly so impressive although it has a fabulous soaring nave, transepts and vaulted ceilings constructed from Norman gothic columns, and some particularly fine stained glass windows where the long part of the nave meets the transepts. ®