Arista Networks – the fourth major startup created by Andy Bechtolsheim of Sun Microsystems fame – has again pushed the 10 Gigabit Ethernet performance and efficiency envelope by pumping out a new switch that delivers a port for under two watts of juice when under load.

The Arista 7050S-64 switch is based on the "Trident+" 10 GbE ASIC created by Broadcom. Anshul Sadana, vice president of customer and systems engineering at Arista, says that the upstart switch maker is the first to get a product based on the Trident+ chip out the door. Other companies are still using the earlier Trident chip from Broadcom, chips from Fulcrum Microsystems (which Arista still uses in its products), or custom silicon, as Cisco Systems tends to use.

The new switch has 48 SFP ports that can run at either 1GbE or 10GbE speeds, plus four 40GbE QSFP ports; with special splitter cables, these four 40GbE ports can be used as four 10GbE ports, bringing the total number of potential 10GbE ports hooking into the box to 64.

The box has a power draw of 125 watts when configured with the 64 10GbE ports running at 50 per cent load and using twinax copper cables, yielding a port that burns under two watts of juice at 10GbE speeds. "That is as low or lower than most Gigabit Ethernet switches today," brags Sadana. Using optical cables, you're talking about around three watts per port for the 7050S-64. Sadana says that switches from competitors range from 220 to 300 watts pushing the same number of 10GbE ports.

The switch comes with rear-to-front and front-to-rear airflow options, so you can face it either way you want in the rack and not pollute your cold aisle with switch heat.

The Trident+ ASIC at the heart of the 1U rack-mounted device delivers 1.28Tb/sec of switching bandwidth for Layer 2 and 3 of the IP stack, and Sadana says that tests performed by Arista show that the 7050S-64 can chew through 960 million packets per second of data.

The switch includes table sizes that Sadana says are roughly twice that of what competitors pack into their 10GbE switches. Operating in cut-through mode, the 7050S-64 can forward packets at between 800 and 1200 nanoseconds, depending on the size of the packets, and when it gets jammed up, the switch has a 9MB packet buffer pool that is allocated dynamically to the ports as they get congested. Up to 5MB of this packet buffer can be allocated to a single port to help unclog its pipe.

The 7050S-64 also has an optional 50GB SSD that can be plugged into its system board. The switch runs a hardened version of Linux, as do all Arista switches, called Extensible Operating System (EOS), and the SSD option can be used to store packet captures and logs on the switch or to archive logs and performance data for several weeks. Sadana says that with the SSD installed, companies can deploy DHCP, Network Time Protocol, or Chef or Puppet configuration-management servers on the switch rather than on another server in the rack.

Arista is not dumping the "Bali" ASIC from Fulcrum and moving solely to the Trident+ chips from Broadcom for its products. The Broadcom Trident+ chips may offer more ports and bandwidth, but the Bali chips have less jitter. Different ASICs for different courses, it seems.

That Bali chip is used in Arista's 24-port 7124SX switch, which was just launched a few weeks ago and which is designed to hold a 500-nanosecond performance no matter how big the packet size. This is because in financial-trading applications, consistent and low latency is more important than any other factor, since the jitter will drive the applications running on the server nuts.

That's why Arista put out the 7124SX Layer 2 and 3 switch, which offers 480 gigabits per second of bandwidth and can handle 360 million packets per second. That's nowhere near what the new 7050S-64 can do, but the 7124SX just doesn't have very much jitter at all.

For Hadoop clusters running MapReduce algorithms, virtual machine farms, or HPC clusters running Message Passing Interface protocols, having a switch that delivers something on the order of 700 to 800 nanoseconds latency on relatively small and mid-sized packets works fine, Sadana tells El Reg. And, according to Sadana, if the latencies creep up to 1300 nanoseconds for storage over IP/Ethernet, it's not the end of the world.

Here's the benchmark data that Sadana shared with El Reg: 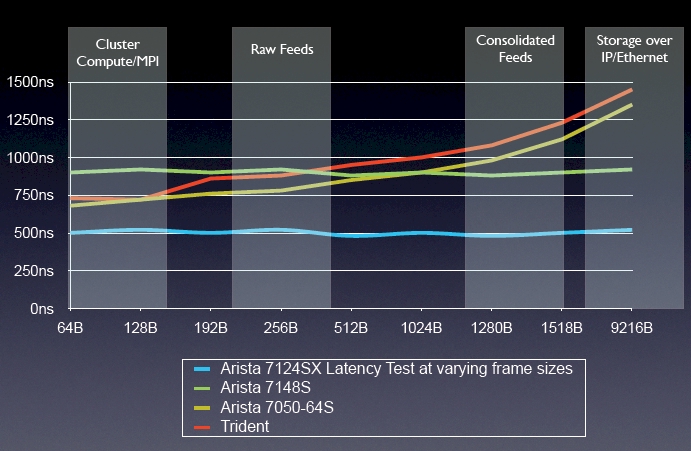 In the chart above, the nearly flat green line is the 48-port Arista 7148 switch, using the Bali ASIC from Fulcrum, which hovers at around 900 nanoseconds of latency no matter what happens to the packet size. The blue line is for the 7124SX, also based on the Bali chip. The slightly curving line is what you get with the Trident+ chip from Broadcom as implemented in the 7050S-64 switch, while the red line is where competitor chips based on the earlier Trident (no plus) chip end up. As usual, Arista did not identify the competition that it tested.