We're all in it together. But some are more together than others ...

He's right that investors in environmental projects are nervous. They've lost half a wardrobe, for very little return. Alternative energy stocks ranked 39th out of 39 industrial sectors examined by the FT in 2010, as the chart shows. They fell by a staggering 52.3 per cent over the course of the year. 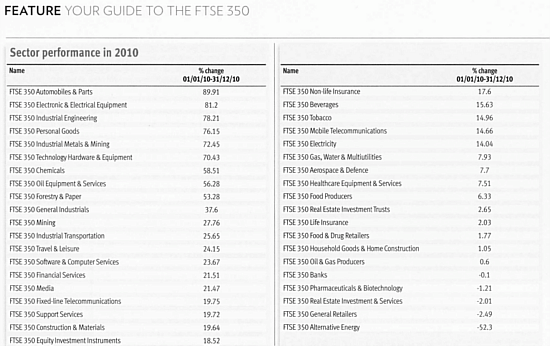 Why bail-outs are needed: alternative energy is the worst investment possible

The best performing sectors were "automobiles and parts" and electronic and electrical equipment, where equities gained almost 90 per cent and 81 per cent respectively.

This is throwing good money after bad, and as we saw in the 1970s, leads to long-term stagnation and decline. Quite why a classic liberal might back such intervention is a mystery.

But the principled Right aren't the only people traditionally opposed to corporate welfare. Enlightened parts of the Left are, too. For the Left, it's even harder to swallow.

Forty per cent of the cost of a carbon floor price is paid for by consumers, the Treasury's own documents suggest. The Budget measures alone add £17 to a family's household energy bill. As even climate Jacobin George Monbiot has noticed, green measures distribute wealth from the poor to the middle classes: FITs are "extortionate, useless deeply regressive". Not all on the Left are happy with this. Graham Stringer MP said Parliament needed to look much more closely at the policies, and the justification for them, because the measures hit the poorest people in the country. (He is MP for the North Manchester constituency of Blackley and Broughton.)

It's a hard one for many on the Left. The number of households in "fuel poverty" – where energy swallows up more than 10 per cent of household income – has trebled. In Wales, more than one in four households is in fuel poverty, according to Wales Online. Left to the market, energy prices would plummet: even with profiteering and heavy Government duties. Gas is cheap, and set to be even cheaper for years to come; gas requires no subsidies.

Greedy Greens want even more, though. Penny Shepherd MBE, who is head of the "finance and sustainable investment association" UKSIF, complained that that it wasn't enough (PDF/42.8 KB).

Actually, we've been here before, but not for several hundred years. It isn't new to have a small elite in society that rips up the rules to suit itself, and that makes heavy, continuing demands on the poor to ensure its wealth, without fear of criticism. Almost every country had one, once. This was a feudal nobility, and when they were challenged, they would make a very interesting defence.

The word "nobility" derives from "noble", and the idea that the elite was more moral and virtuous than you are I. It had a higher calling. Today, it's Greener-than-thou. ®