I have seen amazing music services that never launched because of music company collywobbles. No one would call Amazon's Cloud Drive locker, launched yesterday, an amazing music service. Or even a quite good one. To be honest, it barely deserves to be called a "service" – it's really more of an afterthought.

The music locker – or as we once called them, ftp sites – is an ancient idea. Anyone who wants to has been able to use a music locker has been able to do so for several years, but hardly anyone has. Even Amazon seems bored with it: there are no whizzy features (only a playback button) and the company didn't bother to update the © Amazon 2010 at the bottom of the page, but this could be deceptive. It looks like a buzzword in search of a market.

So what's the fuss about? 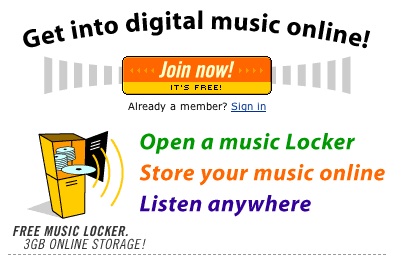 Like almost everything with the word "cloud" in it, it's based on hype, on expectation of future value. Or on more future hype: Apple and Google are developing their own. There's a huge amount of wishful thinking to cloud services – much of it based on agenda-driven DIY sociology of almost comical awfulness. Here's an example, containing meaningful PowerPoint™ headings such as "The Sharing Evolution" and "Collaborative Lifestyles".

(People actually pay to hear stuff that bad. It's amazing).

The wishful thinking is based on the fact that we'll upload everything digital we currently value, and store locally, to a service provider, and pay them to lose it for uskeep it there. This used to be free: ftp space, traditionally, was bundled in with your ISP subscription. The past decade has shown that there's only a tiny market of consumers (as opposed to enterprise IT departments) prepared to pay for such online backup-and-access. In addition, this small group includes many people who have acquired at least some of their media illegally, and they're reluctant to upload it for the inspection of ... who knows? So online-backup-and-access for media is small to non-existent. This really isn't very surprising.

Unless there's a music locker that's offering us some value, somewhere, it's simply yet another backup service – with not many knobs on. And the disadvantages are numerous. If the portable music player had never been invented, we would go to the cloud by default to hear our own music, and we'd have to put up with the caprices of an unreliable network. But even the cheapest Nokia phone is a music playback device – so what's the point again?