Bob Parsons, chief executive of the market-leading domain name registrar Go Daddy, has come to blows with animal-rights organisation PETA (People for the Ethical Treatment of Animals), after he shot an African elephant and posted the video online. 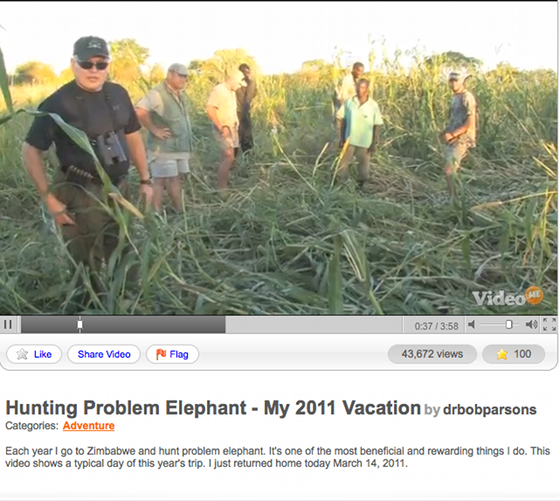 Problem CEO Parsons on the prowl...

PETA yesterday said it had awarded Parsons its "Scummiest CEO of the Year Award" – a title it seems to have made up specially for the occasion – after it became aware of the video.

In the video, which can be viewed here, Parsons fires off two shots at a bull elephant, killing it. He then poses for photographs with the corpse.

Describing his annual hunting trips as "one of the most beneficial and rewarding things I do", Parsons says the elephants he and his team hunt are "problem" animals that trample crops, risking local food supplies and farmers' livelihoods.

The video prompted a petition at Change.org, which described the video as a "gruesome elephant snuff film" and has so far attracted over 2,000 signatures.

In response, Parsons wrote on his blog that the petitioners "have no idea what they're talking about".

The non-lethal alternatives they proposed, such as beehives on poles or chili-infused string fences, are "ridiculous suggestions", he wrote.

"The people there have very little," he wrote, "many die each year from starvation and one of the problems they have is the elephants, of which there are thousands and thousands, that trash many of their fields, destroying the crops."

"Should the folks at Change.org go to Zimbabwe with their bee hives and chili pepper lines, my guess is they'll return with a tusk in their ass and some very pissed off villages and farmers in their wake."

He noted that he tries to only shoot male elephants, in order to avoid upsetting the elephants' matriarchal social structure, and that the elephant meat feeds local villagers.

This does not appear to have satisfied PETA, which is now questioning Parsons' masculinity and calling for a boycott of Go Daddy's services.

The domain peta.org appears to be currently registered with Go Daddy. ®