Industry gets its act together

The RadioPlayer console went live this morning, uniting British radio stations under a simple, open easy-to-use web interface. It's quite a political achievement, given the nature of the squabbling radio business – and all the more so since the entire project required just one full-time employee – and had a budget lower than the annual salary of a top media executive.

RadioPlayer is a pop web console, along with an agreed set of open standards. It will allow radio to be embedded in future devices, such as portable players and set-top boxes. For now, it will become the default UI for listening to both BBC radio and commercial radio on the web – reaching about 4.5 million listeners.

By agreeing to unite under a common platform and API, the commercial sector relinquished its fragmented walled-garden approach – and lost its fear of web users hopping over to another station. That's very easy to do with RadioPlayer. Meanwhile the BBC has effectively given the commercial sector a leg up, and allowed its iPlayer to become subsumed under another brand.

The two groups had common ground, though. As well as wanting to promote web radio in a fragmented landscape, the BBC, as well as the businesses involved, have reason to want to make it easy for others to embed the content in future devices. The BBC and commercial players Global, Absolute and GMG are 50:50 sponsors of the project. More are expected to join. 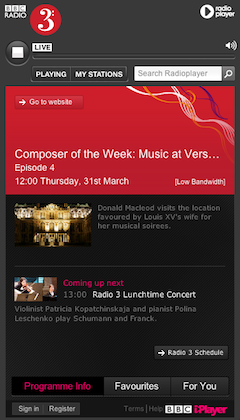 BBC in the new RadioPlayer console
[Click to enlarge]

RadioPlayer v1.0 already encapsulates on-demand features such as podcasts and "listen again", all of which will be searchable. Users can save their favourite channels onto presets. It's a doddle to skip from one station to another. Social media can also be integrated – this is the web, of course. A search engine provided by Autonomy allows users to search by station, location, genre, presenter or name of the programme.

Eventually much more sophisticated web services may be available, and the door will eventually be opened to internet radio stations. Currently you need an Ofcom licence and a £200 one-off access fee. So you don't have to be a giant to take part: this morning's demonstration included content from Brighton's Juice, for example.

Currently radio broadcasters each have their own console – the most famous of which is the Beeb's iPlayer. RadioPlayer allows each broadcaster to retain their own branding. The singular political achievement of the project is persuading the supply side to find common ground.

The project was sparked around 18 months ago, following calls for the iPlayer to become more open. The structure is 50 per cent BBC, 50 per cent commercial players, with equal dilutions as new members join.