Academics in Blighty and the USA have called for a new "science of communicating science" to be deployed in order to deal with the fact that public concern over global warming has plunged in recent years. 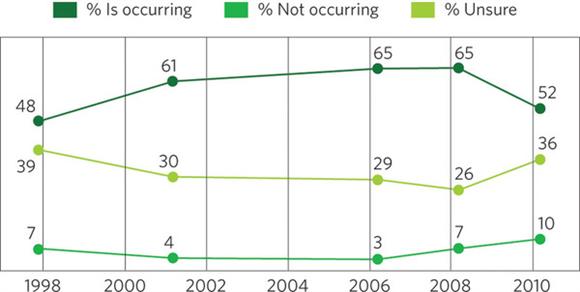 "We need to move on from a sterile debate about whether global warming is happening or not," says Professor Nick Pidgeon of Cardiff uni.

Pidgeon and his fellow psychologist Baruch Fischhoff (of Carnegie Mellon uni in the States) say that instead climate scientists should ally themselves with psychologists and others from the "social and decision sciences" so as to change the public's mind and motivate global action.

The two academics indicate that modern psychological methods could help mainstream climate scientists to be much more persuasive than they currently are. They write:

Recent advances in behavioural and decision science also tell us that emotion is an integral part of our thinking, perceptions and behaviour, and can be essential for making well-judged decisions ... Emotion creates the abiding commitments needed to sustain action on difficult problems, such as climate change ... appropriately framed emotional appeals can motivate action, given the right supporting conditions (in particular a sense of personal vulnerability, viable ways to act, feelings of personal control and the support of others).

In order to generate these emotions in the public, Fischhoff and Pidgeon suggest the creation of special cross-disciplinary teams comprised of "climate and other experts, decision scientists, social and communications specialists, and programme designers". They write:

The two men suggest that these teams would be large and well-funded, along the lines of the RAND Corporation in the States. In the UK, the Tyndall Centre for Climate Change Research would be a good basis to start from, but it would need to develop "a major focus on communication and decision-making research".

With the aid of their special teams of advisers and decision scientists and communications experts, the climate scientists would avoid falling into obvious traps and perhaps alienating the very public they seek to win over.

Many climate scientists are understandably frustrated by the limited response to what they see as the greatest threat facing our planet. One impulsive response to a seemingly recalcitrant public is a big advertising campaign. However, unless founded on sound social and decision science principles and accompanied by rigorous empirical evaluation, such efforts have little chance of sustained success. Moreover, each communication failure makes future success less likely ... Given the gravity and the complexity of climate-related decisions, we need a new model of science communication.

The proposed new "science of communicating science" would seem to have certain parallels with Isaac Asimov's famous imaginary discipline "Psychohistory", which in his books could be used to predict - and alter - the behaviour of large populations. Admittedly Psychohistory only worked on huge galactic civilisations, and then only if the people being manipulated for their own good were unaware that the science of Psychohistory existed - neither of which are the case here. But it's interesting all the same.

You can read the would-be psychohistorians' paper in full here, courtesy of Nature Climate Change. There's also a statement with canned quotes from Cardiff uni here. Given what day it is, we should note that neither are datelined today. ®