They've built working crossbows using rolled up newspapers, shot frozen chickens at airplane windshields, and tried to paint a room using dynamite. They say their crowning moment was actually floating a lead balloon, disproving the old cliché. And when their 2011 season debuts Wednesday night in the US, they'll determine whether Mission Impossible–style masks can really bypass security systems.

But we'd rather talk about destruction. MythBusters, with Adam Savage and Jamie Hyneman, is now in its ninth year, and it's the destruction of everyday objects with high explosives that has become the show's hallmark, the spectacles that stick in most fans' memories.

Messers Hyneman and Savage have blown up a concrete mixer to dislodge solid cement inside, set off a massive explosion to see whether the blast and heat could turn carbon to diamonds, and detonated 1,000 pounds of explosives to test the theory that a shockwave can slow a free-falling unfortunate. Each bang has been bigger than its predecessor, the destruction more total, and the glee – especially Savage's – more palpable. 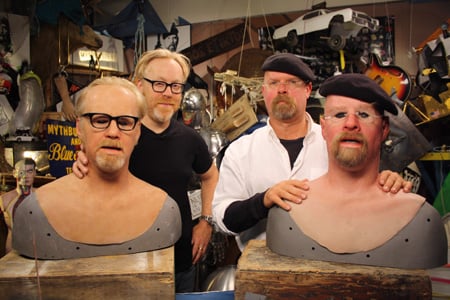 Not a couple of dummies: MythBusters' Adam Savage (L) and Jamie Hyneman

With a fresh MythBusters season now beginning, the detonations won't be dialed down. They'll get more creative. Among the highlights: could the bomb planted in Hitler's Wolf's Lair hideaway in July 1944 actually have killed the leader of the Third Reich, and changed the course of history?

The detonations – and building lead balloons – are all par for the course on a show that tests the credibility of urban myths, schoolboy folklore, received wisdom, and movie stunts. What some might call "truthiness".

Away from the TV cameras, the bangs also have a more serious side: Hyneman has been working with the US government to devise lightweight armor for US military vehicles in Afghanistan and Iraq, all thanks to his work with materials such as TNT and C4 in the frankly unconventional setting of MythBusters.

"We had a lot of experience in the show dealing with explosives, obviously in ways and situations that are outside the norm. This is very revealing, because when you see something outside the norm you get to see what the boundaries of the phenomenon are," Hyneman tells us.

"I'd looked at those and formed a lot of questions in my head. When I saw the opportunity to do research on a topic, I got very active and applied a lot of what I'd learned on the show."

Hyneman's armor had to be ultra-lightweight so the vehicle doesn't get bogged down, but also capable of standing up the shrapnel and blast damage from a powerful IED while protecting the humans inside the vehicle from the pressure wave accompanying a blast.

Hyneman was contacted by a military subcontractor working with the Office of Naval Research to participate in the armor project. He works out of his business, M5 Industries - the San Francisco studio that's featured in most episodes of MythBusters, and that's a hobbyist's dream of workbenches, power tools, and sheet metal.

This is not Hyneman's first work with the military, however. He also devised a "fully realistic human" robotic avatar to give newbie army medics something realistic to work on, and to help prevent them from freezing up when they see gore in the field for the first time. The MythBuster reckons his avatar is as close to human as it gets: it smells bad, has "real hair", groans, and spurts blood until you successfully apply a tourniquet. The machine is being manufactured "by the dozen" and used for training in the Middle East, he says.

"A medic going into the field is prone to freezing when seeing something like a young man with his legs blown off that he has to repair. In that situation you have a matter of seconds to respond," Hyneman tells us. "It's a combination of our FX work, with monster-like puppets that we've done over the years of movies."