It's the oldest working Seagate drive in the UK

Seagate reckons it has found the oldest working Seagate disk drive in the UK: a 28-year-old ST-412 disk drive from 1983.

It is the drive for an old IBM PC, which booted up when it was brought down from owner Mitch Hansen's attic in his Ruislip house. The 5.25-inch disk has four platters, eight read and write heads, spins at 3,600rpm, weighs 2.1kg (4.1lbs) and holds just 10MB of data. Seagate says it would have cost £263 back in 1983. 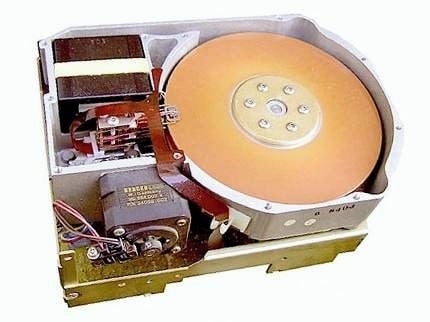 A desktop PC today could use a 3TB Barracuda disk: five platters with 10 read/write heads, spinning at 7,200rpm, and costing £190. In £/GB terms the ST-412 costs £26,300/GB while the Barracuda costs £0.06/GB. The recently launched GoFlex Slim costs £0.25/GB; a lot has changed in 28 years of disk drive development. But in certain aspects, not much has changed at all. Rotation speeds for desktop PCs have generally only doubled, and the I/O capacity of disk drives has not improved much at all on a platter basis.

The 3TB Barracuda still has one read/write head per platter surface and each head now has 300,000MB to look after, whereas the old ST-412 heads each have just 5MB to look after.

The Barracuda will take longer today to read or write an entire platter surface's capacity than the 28-year-old ST-412 will. We have increased capacity markedly but disk I/O has become a bottleneck at the platter surface level, and is set to remain that way. ®