Facebook has "open sourced" the specifications and design documents for the custom-built servers, racks, and other equipment used in its new Prineville, Oregon data center, the first data center designed, built, and owned by the company itself.

On Thursday morning, at Facebook headquarters in Palo Alto, California, the social-networking giant released the designs under the aegis of the Open Compute Project, an effort to encourage the big industry players to share - and collectively improve on - hardware designs suited to a massive online operation like Facebook. The move is in stark contrast to Google, Facebook's primary rival, which is famously secretive about its latest data center and server designs.

"It's time to stop treating data center design like Fight Club and demystify the way these things are built," said Jonathan Heiliger, vice president of technical operations at Facebook.

Facebook CEO Mark Zuckerberg said that by sharing the designs, the company hopes to not only to foster collaboration on data-center design across the industry, but also to drive down the prices of the sort of back-end equipment it's using in Prineville.

"We want server design and data-center design to be something people can jointly collaborate on," Zuckerberg said. "We're trying to foster this ecosystem where developers can easily build startups, and by sharing this we think it's going to make this ecosystem more efficiently grow. We're not the only ones who need the kind of hardware we're building out. By sharing this we think there is going to be more demand for the type of stuff that we need, which should drive up the efficiency and scale of development, and make it more cost-effective." 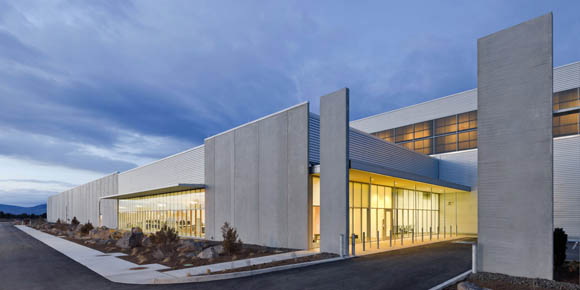 As far back as the spring of 2009, Heiliger publicly complained that the big chip and server makers weren't providing the sort of hardware needed to operate an epic web operation along the lines of Facebook. So the company has built its own gear. But, unlike Google, it prefers not to treat these designs as a competitive advantage it can wield against the competition, and it has extended this philosophy to its entire data center.

According to Facebook, anyone can use the designs without paying licensing fees. Over the past 18 months, Facebook worked in tandem with 10 to 15 partners on the designs, but the company said that all partners have agreed to share all the IP in the designs as part of their participation in the Open Compute Project.

According to Heiliger, Facebook's new data center has a PUE (power usage effectiveness) of 1.07, significantly better than the industry average, which is about 1.5. "We started this project with two goals in mind: having the most efficient compute and the best economics possible," he said.

The new server chassis, motherboard, rack, and electrical designs, he said, were put together by a team of three people. The servers were manufactured by Quanta, a Taiwanese operation that now manufactures more notebooks than anyone else on earth. Heiliger said that Facebook's new Quanta-built servers are 13 per cent more efficient than the machines it was using previously.

Facebook is a longtime customer of Dell's Data Center Services division - a Dell operation that helps organizations build their own server and other hardware designs - but it appears Dell has been cut out of the Prineville project.

Dell, however, was present at today's event, and it intends to use Facebook's "open sourced" designs when building hardware for other customers. It also appears that Dell is still doing work for Facebook in other areas.

Next page: The Penthouse
Page: