Wii 2 imminent as history repeats itself

A famine of first-party Nintendo Wii titles over the coming months means the Wii 2 release is imminent, it has been suggested.

The shortage of forthcoming Wii titles is history repeating itself, according to Kotaku, which has looked into patterns of Nintendo's game releases over the last decade to see if there is a precedent. Apparently there is.

The last big game drought, in 2002, was very similar to what we are going through now. Nintendo has launched a major piece of handheld technology and is facing the gradual retirement of its most popular home entertainment system. 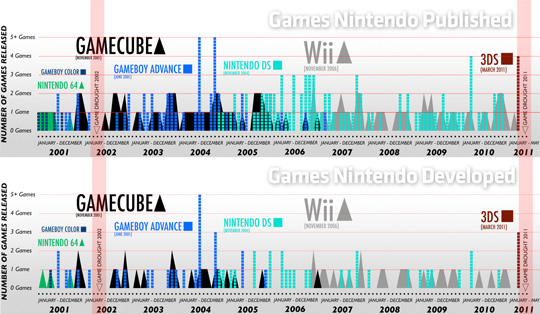 The timeline of the Gamecube can be likened almost identically to that of the Wii. If history is anything to go by, the Wii 2 is on the way, with developers already hard at work on the launch titles.

With Wii sales falling, and game publishers dubbing the current console a "legacy platform", only a fool would bet against a successor coming soon anyway. According to US investment house Sterne Agee, we could get a glimpse of the Wii 2 at this year's E3 Expo in June, with a product launch expected early next year. ®