Exclusive Apple has ordered the developer of a web browser for iPhones and iPads to disable vital functionality. The gatekeepers at the iTunes store, which sells the highly rated browser German browser iCab, ordered it to disable Javascript. The developer says he'll comply.

iCab was launched two years ago, and brings many more features to iPhones and iPads than the vanilla Safari shipped with the device. It also ships with around 25 "modules", which are used to ease integration with services such as Twitter. They are documented here. iCab's "modules" are simply Javascript code.

"I really can't say that I like Apple's decision, and technically it doesn't make much sense," he wrote on the iCab blog. "'Modules' for iCab Mobile are simply a more comfortable variation of bookmarklets, and these are still allowed by Apple (and I assume Apple cannot forbid that the user will save and use bookmarklets)." 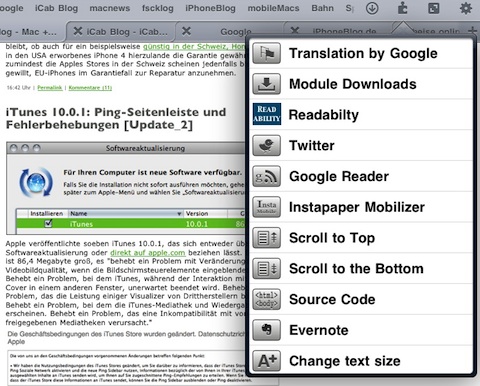 He continued: "Maybe if I would have called the modules 'smart bookmarks' and would have made installing them much more complicated, Apple would have never asked to remove the ability to download them from the internet ... The great user experience of installing modules has probably created a suspicion that these modules are more than just a piece of JavaScript code. From a pure technical point of view, if Apple does not allow to download modules (JavaScript code), Apple would also have to disallow to load web pages in general, because these do also contain JavaScript code."

At one level, it really isn't so surprising. Apple forbids third-party code interpreters, such as Java or Flash, from being delivered through the App Store. And Javascript is a code interpreter. Apps such as Instapaper make quite a lot of use of Javascript – but it must use Apple's Javascript engine, not anybody else's. iCab uses Apple's WebKit for rendering pages.

You can find iCab here.

iCab has a long history. It started out as CAB on the Atari, moving to the Mac in 1999. It was the only browser in development for the original MacOS, long after every one else had moved on. Clauss released a Cocoa version for Mac OS X three years ago. ®