In GNOME 3 the message will be there whenever you decide to interact with it. In some cases - like instant messaging - you can even respond to a new message without leaving your current app. Just click the message, type your reply and send it - all from the notification window.

Undoubtedly, the most controversial decision in GNOME 3 is the removal of the maximize and minimize window buttons. Every window in GNOME 3 has only one button - the close button. To replicate the behavior of the missing maximize button you simply drag a window's title bar up to the top bar and release it. The window will then fill your screen. Drag the windows' title bar away from the top bar to return it to normal size. 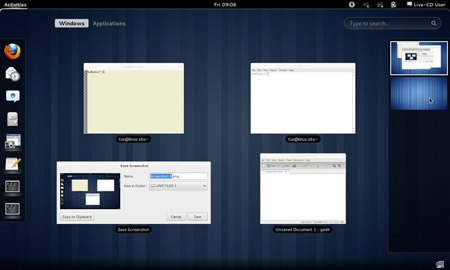 A new way of working: no minimize or maximize window buttons

There is no equivalent action that replicates the function of the minimize button. Technically, you can minimize windows by right-clicking the close button and choosing minimize (or maximize for that matter), but that's definitely a step backwards for those that regularly minimize windows.

There isn't room here to get into the exact reasoning behind the lack of window buttons in GNOME 3, but the underlying idea is that GNOME 3 wants you to try a different workflow. And in fact the shell, along with the much improved desktop switching tools, go along way toward eliminating the need to minimize windows. But go a long way toward and completely replace are two totally different things. There's no way to sugar coat it - if your work habits rely on minimizing windows you're going to hate GNOME 3.

The decision to eliminate the minimize and maximize buttons also highlights another aspect of GNOME 3 that may irritate long time users - the lack of customization options. It used to be that GNOME could be tweaked to your liking, in fact customizing GNOME was just part of what you did - GNOME out of the box was never anything to write home about.

If fiddling with your system is part of what drew you to Linux in the first place, GNOME 3 in its current state will likely prove disappointing. There are ways to customize GNOME 3, but it will mean re-learning many things.

If, on the other hand, you really don't care what your desktop looks like and you just want to get some work done, GNOME 3 is a huge step up over GNOME 2.

As someone who has traditionally replaced GNOME's standard interface with tools like Docky and GNOME Do, I initially found GNOME 3 disorienting. But, after using it for a few days (via Fedora 15 beta), I found that GNOME 3 had slipped into my workflow with very little effort on my part.

Yes, GNOME Do offers more tools than the GNOME Shell, but for the 90 per cent use case the GNOME Shell ably does the job. And yes, I still sometimes get frustrated with certain behaviors. For example, clicking on an app in the dock brings the app forward if it's already open, handy most of the time, but irritating if you were expecting a new window. Overall, however, I've found that it doesn't take long to adjust to GNOME 3's quirks and get back to getting work done.

Nice though GNOME 3 may be, I don't suggest upgrading just yet. For one thing, this is essentially a 1.0 release and not everything is quite there just yet. But more important most distros haven't yet fully integrated with GNOME 3.

If you'd like to get up to speed on GNOME 3 before your favorite distro ships it, you can grab a live CD from the GNOME website. ®