Teradata wants to keep its dominant position in data warehousing and analytics, so it is picking up the technology pace to take on Oracle with its Exadata appliances and IBM with its Netezza and Smart Analytic System appliances. The company is rolling out an improved Enterprise Data Warehouse product line and a separate product that mixes disk drives and flash memory to shoot the gap between its disk-based and flash-based appliances.

But not everybody needs that kind of performance, or can live with the 17 TB of data space upper limit that the 24-node EPA 4600 has. So Teradata is creating a new box that sits somewhere between the Active EDW and the EPA 4600 in its product line, offering a balanced mix of 3.5-inch 15K RPM Fibre Channel disks and SSDs.

To build this hybrid box, Teradata first went back to the drawing board and rejiggered the all-disk Active EDW design with the 6650 appliance, an upgrade to last year's Active EDW 5650. Scott Gnau, chief development officer at Teradata, tells El Reg that the 6650 appliance consumes about 25 per cent less energy and has about a 25 per cent lower footprint than the 5650 appliance. To accomplish this, 3.5-inch Fibre Channel disk storage used for the server nodes is packed more tightly in the server nodes.

The Active EDW comes in two flavors. The 6650C appliance only has one of the two processor sockets in the server nodes populated with a six-core 2.93GHz Xeon X5670 processor and 48GB of main memory on the nodes. Each node can have up to four disk drives and uses 8Gb/sec Fibre Channel adapters to link out to additional storage. The Active EDW 6650C uses Teradata's BYNET V4 system interconnect to link cluster nodes together and scales up to 4,096 nodes; it is designed to co-exist with prior EDW boxes and offers up to 22.8TB per node of user data space with 42 to 124 disks per node.

The new Active EDW 6650H plugs in a second processor for a total of a dozen cores per node, doubles up main memory to 96GB on the server node, and allows for between 84 and 232 disks to be attached per node for up to 29.6GB of user space per node. This box also scales up to 4,096 nodes across that BYNET 4 network to scale the data warehousing workloads, for a total capacity of 92PB. 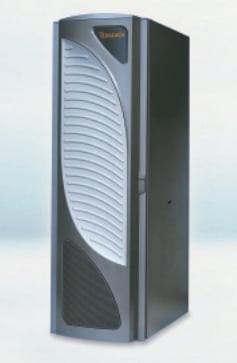 The Active EDW 6680 gets the flash drives and there is a significant performance boost on the I/O front and even denser packaging. This box is based on a two-socket Xeon X5670 configuration (that's the six-core chips running at 2.93GHz) with 96GB of main memory. Teradata is using 300GB SSDs from Pliant, with a total of a dozen SSDs per tray and three trays per cabinet. Gnau says that Teradata has tuned up four different SSD-disk node configurations, which vary depending on how much of the data customers are using is hot or cold, with the percentage ranging from a low of 15 per cent to a high of 34 per cent of total customer data space. Teradata is using disk and SSD enclosures from LSI this time around. Using the BYNET 4 interconnect, the 6680 can scale up to 4,096 nodes; depending on the disk and SSD configuration, each node can have between 3.8TB and 7.3TB of combined disk capacity, which works out to between 15.6PB and 29.9PB of customer data space max.

Teradata to take $60m hit for withdrawal from Russia

Calls time on interactions and services with customers, including state-owned bank Sberbank
Storage6 May 2022 |