President Obama's personal helicopter fleet will soon include the famous, controversial V-22 Osprey tiltrotor, according to reports. However it seems unlikely that the amazing plane-copter combo craft will land on the White House lawn very often. 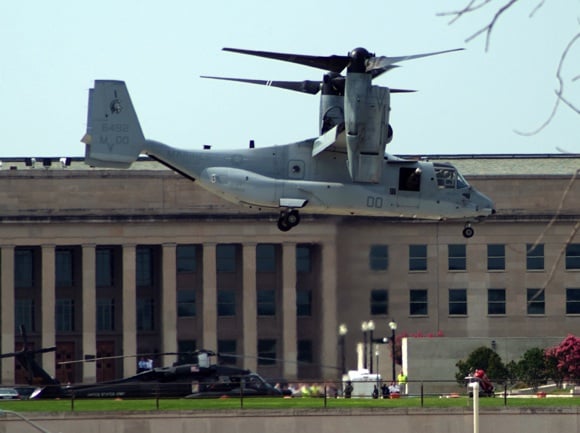 Military.com reports that HMX-1, the US Marine aviation squadron which provides the presidential helicopters – such a chopper assumes the callsign "Marine One" when the president is aboard, just as any airforce plane becomes "Air Force One" – is soon to get V-22 Ospreys. However the tiltrotors will not be replacing the VH-3 Sea Kings and VH-60 Blackhawks which are normally seen lifting the leader of the free world on and off his front lawn: rather the V-22s will replace the squadron's monster Sea Stallion heavy-lift copters.

The Stallions don't normally carry the president, but are used to shift presidential kit or in other utility tasks. The wider Marine Corps has a large fleet of these monster helicopters, now under some strain due to combat operations in Afghanistan, and the presidential Stallions will now supplement the regular fleet. Some 14 Ospreys will be assigned to VIP support duties in their place.

The Sea Kings which actually fly the president about are getting very old and should have been replaced some time ago. Under the Bush administration the official plan was to use a specially modified version of the Merlin helicopter now in service with the Royal Navy, RAF and other European forces. The Merlin was chosen in part because it is one of the larger choppers which could set down on the White House lawn without causing too much destruction.

But the Merlin isn't particularly strong in the matter of lifting power*, and it struggled desperately to carry any reasonable number of people along with the communications and protective kit required in the presidential role. The project's costs climbed to the point where it became an issue in the presidential election, with both candidates vying to condemn it. The Merlin was duly axed shortly after Mr Obama took office, and since then the Marines have been scratching their heads and looking for something else.

Rotary-wing colossus Boeing suggests that the Osprey could replace the Sea King as well as the heavy-lift Stallion at HMX-1: it has previously been reported that the tiltrotor could physically fit onto the White House lawn. The Marines would love the idea of using their often-criticised flagship aircraft in their most prestigious task, and the V-22's aeroplane capabilities could save time and add security.

Next page: Can you really fold one of these things up into a transport plane?
Page:
Corrections
34 Comments