The founders of three of the internet's largest gambling sites have been indicted and charged with bank fraud, money laundering and illegal gambling offenses by US authorities.

Eleven individuals have been charged in total by the US Department of Justice with running operations that violated the Unlawful Internet Gambling Enforcement Act of 2006.

Among those charged are executives from Isle-of-Man based Pokerstars, Ireland-based Full Tilt, and Costa-Rica based Absolute Poker.

The authorities have so-far arrested three individuals, all US citizens, and are working with international law enforcement agencies to arrest a further eight US citizens and foreign nationals in connection with the charges. 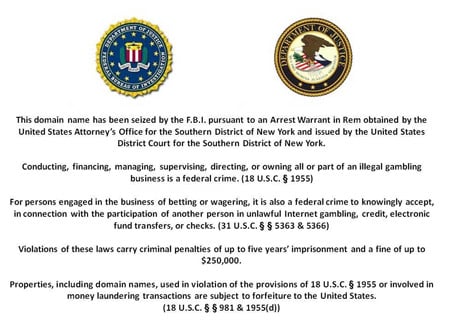 Absolute Poker's domain name was seized by US law enforcement

The individuals face a range of charges with different prison sentences and fines, while the US is also seeking at least $3bn held by the companies.

The feds have seized five domain names issued by the poker companies to their online businesses in the US, and have issued orders freezing 76 accounts in 14 counties. At time of writing, the Absolute Poker domain was among the domains seized.

According to New York's US Attorney's Office, the companies operated in contravention of the 2006 act on unlawful gaming.

Authorities say those indicted disguised money from US gamblers as payments to hundreds of non-existent online merchants selling items like jewelry and golf balls.

The companies deceived banks into processing the money by creating fake corporations and web sites. When the banks detected and shut them down, they worked with the principals of smaller banks offering them investment in return for handling payments.

The indictment names one bank, SunFirst Bank in St George, Utah, whose vice chairman of the board and part owner John Campos allegedly agreed to process gambling transactions in return for a $10m investment in SunFirst, which would give them a more than 30 per cent ownership stake in the bank. Campos also requested and received a $20,000 "bonus" for his assistance, according to US law enforcement.

One of the associates of the individual who approached Campos said in an email they had "purchased" SunFirst and "were looking to purchase" "a grand total of 3 or 4 banks" to process payments.