"What are the 1,000 people around you doing?" asks Otto Hilska, CEO of Flowdock, a company that offers a "super-fast and super-integrated" way of interacting with your fellow employees and solving issues as they come in.

Broadly, it's what Google Wave should have been: a structured way to use instant-messaging technology. The demo was well set-up, with a customer email appearing, a coworker tacking on some information, Hilska asking a question, and the employee getting straight back to the customer – all of it visible to anyone who wishes to tap into the conversation. "You can react in seconds instead of hours," he explains.

The system also makes use of hashtags to organize content. "Conversations start documenting themselves," Hilska chimed in, "information in a chat doesn't get lost."

It's not hard to see how Flowdeck could be useful, but as Hilska is painfully aware, "People are using Skype chat and IRC to do this, and are unused to have a communications tool that is not free."

The system is clearly more structured and useful than the free options that people are playing around with to achieve the same ends, but will they pay $19 a month for six users or up to $159 a month for 80 users and 20GB storage?

Otto claims that development on the most well-known product that charges for this sort of interaction – Campfire, by 37signals – has "stalled". Is that a sign that, despite the advantages, the world isn't yet ready to pay for structured IM software?

Flowdock has 10,000 users and the company is looking for seed funding, as well as for a salesperson in San Francisco. 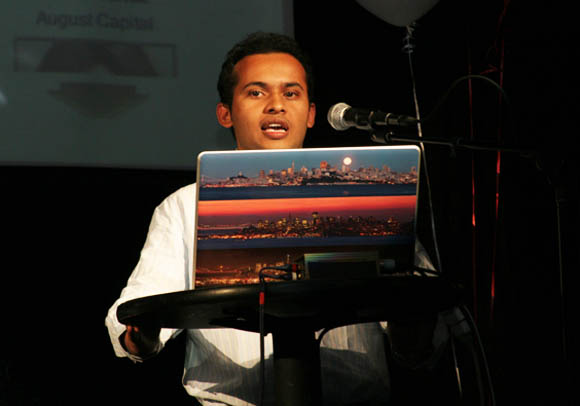 Anyway, Syed is fortunately more on the ball when it comes to his business: connecting you up with people for lunch. "Every day we have successful, savvy, smart people going for lunch – with the same people," he said with something bordering on disgust. Well, so what? "The difference between success and obscurity is networking," that's what.

We'd love to say Syed is wrong, but let's be honest: even the closest work colleagues can get a little tedious after the third consecutive day of lunch. And meeting up with new people is often a great way to give your brain a good stretch. And so the idea – which is nevertheless not ideal for shy or retiring types – is to find a way to link you up with like-minded people for lunch. And in this case that means entrepreneurs and new-tech types.

The site was launched two months ago in San Francisco, and according to Syed has just hit critical mass. We signed up and checked it out, and he appears to be right. It will shortly be launching in New York and Los Angeles, and there is already a waiting list.

This is how it works: you sign up – well, you ask for an invitation, which you'll get the next day – and provide links to your LinkedIn profile, Twitter account, and so on, and the site gives you a reputation ranking. You then type in your zip code, your interests, the distance you're willing to travel for lunch, the days and times you are free, and LetsLunch will match you up with someone.

Once that lunch is over, you can rate your lunch date and they'll rate you – meaning, presumably, that if you are endlessly fascinating, people will clamor for your attention in the future, and the more fascinating you are, the less you'll need to mix with the dullards. Unless, of course, it turns out that you are one of the dullards.

Or, if you're really one of the cognoscenti you can become a "VIP" – although it's not entirely clear how – and plebs like the rest of us will be encouraged to select which of you we would like to have lunch with as some kind of reward for frequently using the service.

Putting aside the virtual certainty of being made to feel inferior, LetsLunch may be a gift to those working in big cities that fancy a break from the daily drudge. The site hopes to make money by doing deals with restaurants, and charging a premium to let people pick their lunch partners.

It's one of the peculiar facts of life: when you hear about an organized outing or corporate fun day, you start staring at your stapler wondering if it could cause just enough pain to get you out of going but not enough to actually do any damage. But then you go anyway, and despite yourself, you find that you actually had a good time.

Well, The Go Game team are the overly cheerful people that pop up on such occasions as pretty much the only ones who know what the hell is going on. They are corporate fun creators – they do it all over the US, and have been doing so since 2002.

So what's new? In short, an iPhone app. As cofounder Ian Fraser explained: "Typically we charge $100 a head, and a lot of companies go 'How much?'." And so the iPhone app distills what The Go Game has learned over 10 years and puts it in a location-based app for just $50 a team.

Ian acknowledges that fifty bucks is still "a lot more than normal for an iPhone app," but points out that doing anything for 25 people for under $400 is pretty much impossible. Three people from the company gave a quick demo of the game, which in this case comprised of recreating the familiar painting "American Gothic" using a wig, glasses, and spatula. 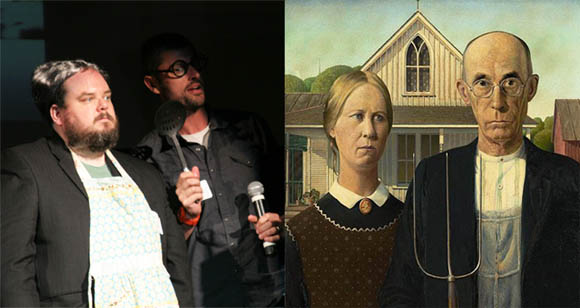 Grant-Woodsy fun with The Go Game

A revolutionary advance in technology this is not, it is just "very silly, awesome fun", as the company explains. And what sets the app apart is the fact that The Go Game has been organizing events in over 500 US cities for nearly 10 years – that's certainly a huge competitive advantage over any other company that may want to create stupid location-based games in an iPhone app.

We suspect that the proof is very much in the pudding with this app. Can people really be expected to have corporate fun without a third party whose paycheck depends on everyone getting involved and enjoying themselves?

We wish The Go Game had provided a code for one free game – we may have tried it out. They're also in the unfortunate position that "Go" is an ancient Japanese game that is so well known that it swamps any efforts to find Fraser's efforts on the App Store.

So if you are interested – and if you have an iPhone – you'll need to search on "go game app" to find it. Have fun! (Possibly...)

Next page: UI critiques, execs as blobs, and 60 seconds in the spotlight
Page: