UI critiques, execs as blobs, and 60 seconds in the spotlight

Okay, so Facebook has a horrible user interface. But for the rest of the world, creating a website with a successful look and feel can be the difference between making it and breaking down. Of course, no one consciously creates a horrible interface – they just sort of happen.

TryMyUI aims to help correct that by providing – at $25 a pop – user reviews of your website. You can book a review on their website, select the demographics of the person you want to look at your site, give them a set of tasks or instructions, and then sit back and wait for their recorded video to appear in your inbox, which will tell you just how horrible your website is.

The average video runs from 15 to 20 minutes, and for their demo TryMyUI got one of its reviewers to look at SF New Tech's website. It didn't get high marks.

For some reason, TryMyUI is pushing the fact that your video will arrive within two hours – which is presumably their way to gain a competitive edge over other companies that do the same thing.

CEO Sani El-Fishawy explains that his service is superior because it lets you choose reviewer demographics (which you have to assume are true), because it does a different kind of immediate-impression test, and because they will soon to add a range of new features that will offer stats such as how long it takes to do a common task.

Of course what you may be most interested in is how to become a reviewer. Well, you apply online. Around one in 15 people are accepted, according to El-Fishawy, and what you need to demonstrate is the ability to say out loud what you are thinking, and to stay on task. If that fits the bill for you, you can earn a humbling $10 per review.

According to our calculations, if you did nothing but review websites all day, every day, you could earn $150,000 a year – so get to it!

Back in the good ol' days, you could grab other people's content, plaster it on your website, and then make small sums of money from swamping your site with ads.

Sadly, these days the copyright lawyers have swept down and made people actually do real work to make money. It's gotten so bad that, as John Pettitt, CEO of Repost.us, pointed out: "Three-quarters of all blog posts are made up of three sentences and a link to the article they are talking about." But there is another way. 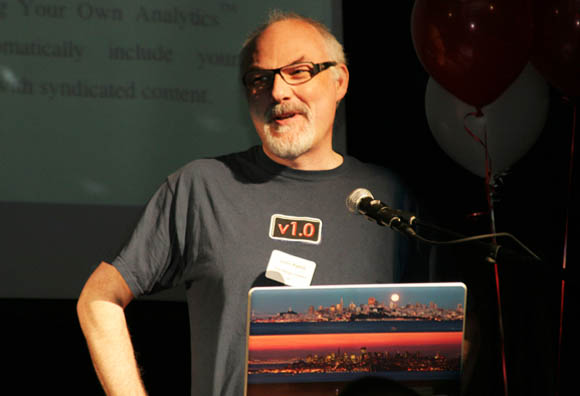 Having been struck by the fact you can embed a video but not an article, Pettitt's system allows people to grab embed code from a site with an original article and republish it on their website. The copy is pulled from the original site, meaning that the original site's Google ranking isn't affected.

Perhaps more importantly, the publisher can add rules to the use of the copy, such as sending it through with ads or with a per-impression cost. Repost.us – of course – takes a cut. According to Pettitt, "Content syndication hasn't changed much in 100 years." His system could allow an article to go viral, he claims. The only problem is that no one is quite sure what to charge.

On a quick perusal, the technology definitely seems to be there, and if Repost.us is to be believed, a lot of big media companies have expressed an interest. "Nobody has said to us 'That's a dumb product'," Pettitt said. "And in my experience that's pretty unusual."

We'll see if we can set this article up in Repost.us and report back about the millions of dollars it brings in.

And now the winner, with a whopping 35.8 percent of the audience votes: Sococo and its "social communications for distributed teams" system. Presumably that second "co" stands for "company".

It's not hard to see why this one was a winner with the SF New Tech group: it creates an online office space while leaving you alone in your own physical world. Which is pretty much the perfect scenario for most of those in the room.

When you run the Sococo app on your PC, a map shows a virtual office with little colored head blobs representing people in your company. Virtual rooms work in much the same way as physical rooms: if you are in the room you can hear what is going on, as well as see what is on the whiteboard in that room. If you're not, you can't. There are private offices, social areas, conference rooms, and so on. 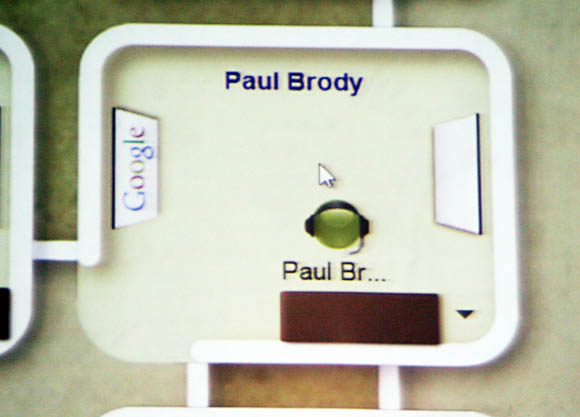 Even just a few years ago, this idea would have sounded ludicrous in the extreme – more Pac-Man than serious collaboration tool – but in a world where many of us have grown familiar with working remotely, in a strange way it makes sense. And Sococo should know – the company is a distributed team and uses its own product to work on its own product, like an online wormhole.

What Sococo is particularly happy about in its latest iteration, however – and what most likely caused it to dominate the SF New Tech voting – was its ability to seamlessly pull in other cloud-computing apps into virtual rooms: Salesforce, Highrise, QuickBooks, SugarCRM, and the like.

There is something oddly compelling about being able to pull all these disparate bits of Web 2.0, Internet 3.0, and Online 4.0 flotsam into a structure that makes sense. Sococo CEO Paul Brody told us that product-development teams are particularly keen on the system.

Of course, it could also be the case that in years to come Sococo will be seen as the epitome of a 2011 Wave of Madness (DotCom Boom 2.0) in which everyone thought an entire economy could be sustained by paying for cloud software that let you share information produced by other cloud software in order to help you run your cloud software company.

And now for something completely demented

After the demos, Q&As, and voting, the event ended with anyone at all being allowed to give a quick 60-second pitch about whatever they like by simply queuing up and grabbing the microphone.

This was possibly the most fun part of the evening, especially if you have a sick sense of humor. We counted fifteen "60-second-spotters", as they're called, each slipping further and further away from reality. 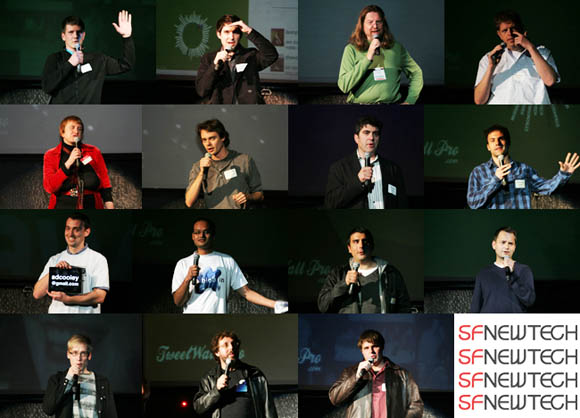 As far as we could make out, three people had world-changing products that were just-nearly-quite ready, but that required money, CTOs, developers, and a surprisingly long list of other people to make it happen. Two people didn't bother with that and just declared – in delightfully vague terms – that they have The Genius Idea and all you need to do is Believe, then waste the next six months of your life for no money finding out that someone has already created what you're working on, but did it much, much better.

And then there were people who just wanted a job, those who keep saying the same thing but didn't get any clearer ("Sportlyzer - like 'Sport' 'Analyzer'." Sportalyzer? Sportylyzer? Sportanalyzer?), and someone who, as far as we could make out, had spent 20 hours in a kayak and now wanted free hosting.

Thankfully – or not – you can find more details about Wednesday's 60-Second Spotters on the SF New Tech website.

And with that, SF New Tech's fifth birthday party ended. And Myles Weissleder didn't go back to his houseboat office because it hit either a duck or the dock, we couldn't be sure which – the speaker feedback was too intense.

See you next month. ®

All photography by the author