'We don't beat our chest'

Dell makes a lot of noise about its bespoke servers cobbled together by its Data Center Solutions unit, and this gets under Hewlett-Packard's skin a bit considering that it is the largest shipper of servers in the world and it has its own quasi-custom, dense, energy-efficient servers aimed at hyperscale customers, too. So you might think that HP would make some noise about the new ProLiant SL machines at one of the recent press and analysts events it has hosted.

Instead, HP has done a soft launch on a revamped lineup of cookie-sheet servers that slide into the ProLiant SL6500 rack-mounted ovens enclosures. By "soft" I mean it's talked to key analysts and journalists about the machines and then just plunked the feeds and speeds out there on the corporate web site for people to find.

"We don't beat our chest about it as much, but four out of five of the world's largest search engines are powered by ProLiant servers," director of marketing for service providers and high performance computing at HP Glenn Keels tells El Reg. He adds that HP can and does build custom servers "where needed, and at scale." 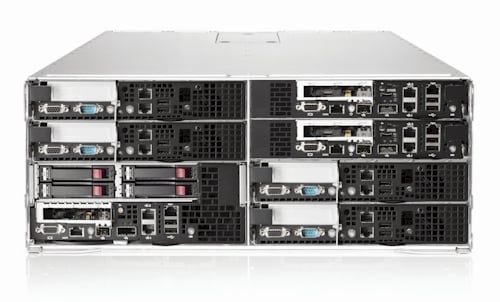 The ProLiant SL6500 Scalable System chassis is not any different from when it was announced last October. The chassis is 4U high and allows for half-width server trays that are 1U or 2U in height to slide into the chassis.

There are also now full-width blades that can slide into the enclosure, and you make be asking yourself how this differs from an enterprise blade server that has been tipped on its side. The answer is simple: a cookie-sheet server does not have a midplane that blades and switches plug into and that a management controller in the chassis uses to control all of the individual nodes. Cookie-sheet servers are just funky ways of packing in free standing servers (as far as networking goes) but having them share power and cooling.

There are four new server trays that slide into the SL6500, two of them based on Xeon 5600 processor from Intel (of course) and two based on processors from Advanced Micro Devices. This is the first time the ProLiant SLs have had Opteron options, and considering that the Opteron 6100s came out in March 2010 and Opteron 4100s followed in June, you might be wondering what took so long. The sales cycle for the SL family of machines is a bit different from the general-purpose market and HP wanted to make sure the SL idea flew before it started expanding the lineup. 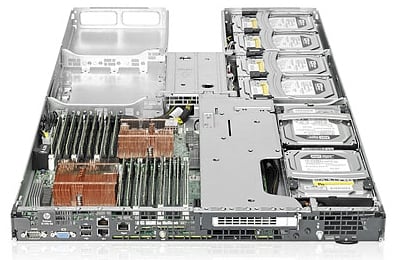 The SL160s G6 is still at the G6 generation because it has the iLO 100 service processor on the server node rather than the full iLO 3 card that is included with the G7-series servers in the ProLiant family aimed at enterprise-class data centers.

It is a full-width tray that can have one or two Xeon 5600 processors on its system board, which is mounted on the front left of the tray. The mono for this server node has 18 memory slots and can support a maximum of 192GB of main memory. You can only use a dozen of the slots with 16GB memory sticks to 192GB; with 18 of the 8GB sticks, you top out at 144GB.

HP is supporting Xeon 5600s with either four or six cores in the node. The SL160s G6 tray has room for six 3.5-inch SAS or SATA disks or ten 2.5-inch SAS or SATA disks or solid state drives. (Fat 3.5-inch SSDs are not supported.) The drives are not hot plug, and given the distributed nature of the applications that are run on these types of servers, they don't need to be. The system has two expansion slots and has one integrated Gigabit Ethernet port; it also has an on-board, six-port SATA RAID controller. 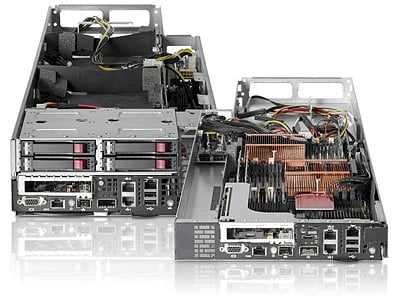 The base SL160s server comes with a single four-core Xeon E5620 processor spinning at 2.4GHz and 6GB of main memory; it costs $1,475. Using a slightly faster six-core X5640 running at 2.66GHz and putting in 12GB of main memory boosts the price to $2,545. Kicking that up to two Xeon X5672 processors (quad core running at 3.2GHz) and bumping up memory to 24GB raises the price to $5,745. These SL machines are not in the online store configurator, so you can't see the effect of choosing other processors and adding disk and SSD options.

If no one else can help, and if you can find them, maybe you can hire... The B-Team