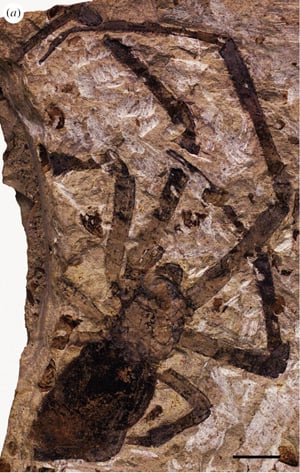 The female Nephila jurassica (pictured - scale bar represents 5mm) was unearthed in Inner Mongolia. She's not only a record-breaker in legspan, but also pushes back the earliest known example of the Nephila genus to the Middle Jurassic.

The fine specimen was found "encased in volcanic ash at the bottom of what would have been a lake", the BBC explains. Professor Paul Selden, from the University of Kansas, told the Corporation: "You see not just the hairs on the legs but little things like the trichobothria which are very, very fine. They're used to detect air vibrations. There's a very distinct group of them and they're a very distinct size which is typical of this genus."

Selden and fellow reserchers ChungKun Shih and Dong Ren, explain in the journal Biology Letters that Nephilidae "originated somewhere on Pangaea, possibly the North China block, followed by dispersal almost worldwide before the break-up of the supercontinent later in the Mesozoic".

The golden orb weavers survive to this day in tropical and sub-tropical zones worldwide, with females spinning webs up to 1.5 metres in diameter from "a very tough and distinctively golden silk".

The males are a pretty puny bunch, being much smaller than the females in an example of "extreme sexual dimorphism". The researchers are keen to see if that was also true of the ancient Nephila.

Shelden said: "The previous oldest Nephilid is a male from the Cretaceous Period found in Spain. That male is normal sized, whereas in the present day the females are giants.

"So, it looks like we may have this dimorphism going back this great length of time. We'd like to find a male in the deposit to confirm this. All the evidence would suggest the male would be normal size, but we haven't yet located one." ®