NASA is celebrating the forthcoming 21st anniversary of the Hubble Space Telescope's launch with a fetching snap of a galactic "rose". 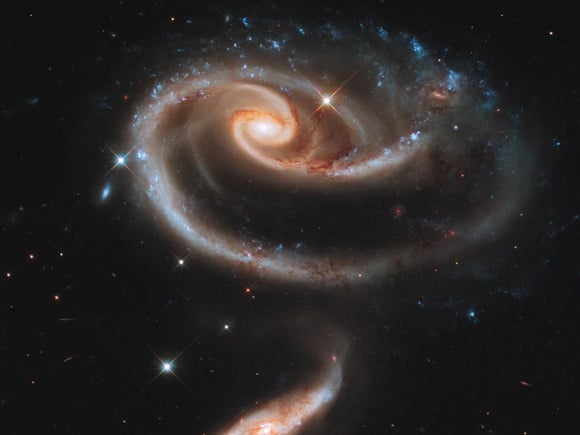 Hubble was lifted heavenwards on 24 April 1990 aboard space shuttle Discovery. Its anniversary photo was captured by the Wide Field Camera 3, under the guidance of astronomers at the Space Telescope Science Institute in Baltimore.

It shows spiral galaxy UGC 1810 "distorted into a rose-like shape by the gravitational tidal pull of the companion galaxy below it, known as UGC 1813". The pair, collectively known as Arp 273, lie in the constellation Andromeda, some 300 million light-years from Earth.

Senator Barbara Mikulski of Maryland enthused: "Hubble is America's gift to the world. Its jaw-dropping images have rewritten the textbooks and inspired generations of schoolchildren to study math and science. It has been documenting the history of our universe for 21 years.

"Thanks to the daring of our brave astronauts, a successful servicing mission in 2009 gave Hubble new life. I look forward to Hubble's amazing images and inspiring discoveries for years to come."

NASA head honcho Charles Bolden joined the love-in with: "For 21 years, Hubble has profoundly changed our view of the universe, allowing us to see deep into the past while opening our eyes to the majesty and wonders around us.

"I was privileged to pilot space shuttle Discovery as it deployed Hubble. After all this time, new Hubble images still inspire awe and are a testament to the extraordinary work of the many people behind the world's most famous observatory."