Brother, can you spare a dividend?

File this under "problems you'll never have": Apple's corporate wallet is stuffed with nearly $66 billion. And as that nest egg grows, so do questions about what Jobs & Co. plans to do with all that ready mazuma. 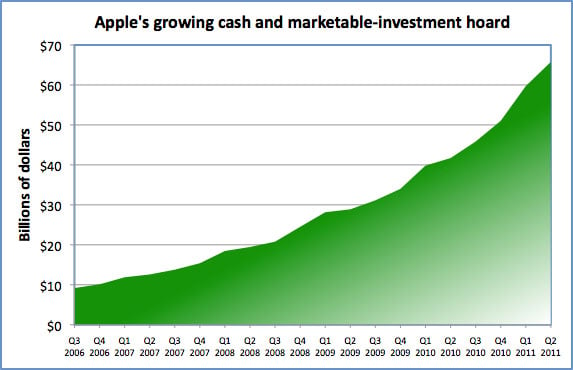 The growth rate of Apple's nest egg is accelerating

No matter how big of a company Apple is – and it's a big one, with a market capitalization of about $323bn, second only to Exxon Mobile's $428bn on US markets – $65.8bn is one hefty chunk of change. At the end of 2010, the oil giant reported that it held $35.3bn in "investments, advances and long-term receivables," well under Apple's $49.8bn short- and long-term investment portions of its $65.8bn hoard.

How Exxon Mobile and Apple handle their holdings, however, is a study in contrast. At the end of 2010, for example, Exxon Mobile reported a relatively modest $7.8bn in "cash and cash equivalents" after distributing $8.5bn in dividends during the year to holders of common stock. Out of the $65.8bn that Apple announced on Wednesday, the company's cash and cash equivalents totalled a hair under $16bn, and their dividend distribution, as always, totalled zero, zip, nada, squat, and zilch.

There are good arguments to be made for and against Apple paying dividends, but Apple and its CEO Steve Jobs have consistently resisted any calls for stockholder payouts. 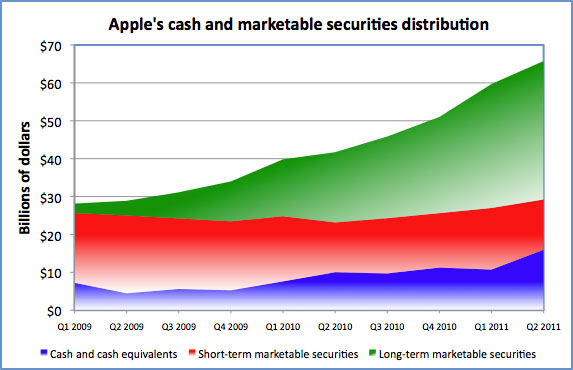 At that same investors' meeting, Jobs said that he prefers to keep Apple's piggy bank full because "You never know what opportunities lie around the corner. We are a large company now. So to move the needle, we need to think big."

Although Jobs appeared to be talking about acquisitions, that argument doesn't hold up to historical scrutiny. Under Jobs, Apple has never made a truly big acquisition, preferring instead to plug holes here and there with acquisitions aimed mostly at acquiring talent, such as when it picked up music-streamer Lala in late 2009, mobile ad broker Quattro in early 2010, and map-software maker Poly9 in mid-2010.

In fact, to our recollection, the largest acquisition that Apple has ever made was that of NeXT Software in December 1996 for about $400m – around $570m in today's dollars. That, of course, was the deal that brought Steve Jobs back to Cupertino.

Apple's "buy brains" strategy, however, hasn't stopped an ongoing flood of speculation about what companies it should snap up with all those waiting billions. Among possible acquisition targets, The New York Times blog Dealbook suggests NetFlix, which as of Friday had a market capitalization of $13.24bn. Last year at this time, the talk was about Apple acquiring AMD. Even Sony and ARM have been rumored to be targets.

Apple, of course, is not alone in sitting upon a mountain of cash, it's just that their massif is more massive than most. The total amount of ready assets now crowding American corporate coffers is estimated to be hovering around $2 trillion.

This February, President Obama give a speech to the US Chamber of Commerce during which he practically begged companies to use some of their holdings to hire more workers and help get the US economy off the schneid.

"As you hire," Obama told the traditionally conservative Chamber, "you know that more Americans working means more sales, greater demand, and higher profits for your companies. We can create a virtuous cycle."

The problem, of course, is that dipping into corporate holdings to spread more money thoughout the economy, and thus to increase both sales and profits, is a chicken-and-egg affair. Someone has to go first. And in these uncertain times, it's the rare corporate leader who's willing to take that risk.

Or, as Steve Jobs told his investors back in August 2010: "When you take a risk, you jump in the air, and it's nice to know that the ground is still there." And $65.8bn in reserves makes that ground quite soft.