Er, where is EMC?

The latest result improves on that, with Pillar CEO Mike Workman blogging that he was particularly pleased with the latency, and including a chart showing how this was better than a group of competing systems. 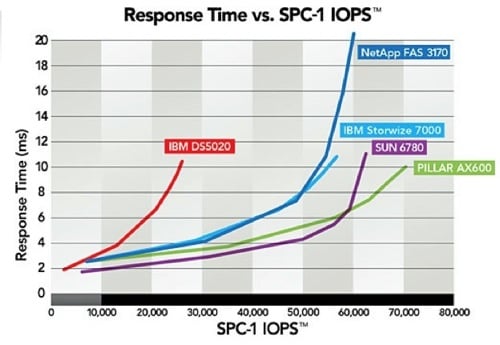 The cost per IOPS is not so favourable to Pillar, with a 2-node IBM Storwize V7000 recording $7.24/IOPS but then it only achieved 56,510.85 IOPS, a lot less than Workman's Axiom 600. For the moment the Axiom is the leader of this particular pack.

Looking at the SPC-1 results, and remembering that EMC has been very active in the SPECsfs2008 filer benchmark area, you ask yourself where are the EMC SPC-1 results. There aren't any, not one, apart from some NetApp-submitted CLARiiONs from a few years ago.

NetApp products are present in the SPC-1 tables but the results are all old, 2008 vintage, with no newer systems represented, although some are in the separate SPC-1 (E) - for energy - listing. It makes you think. There is no ability here to compare newer NetApp arrays with their Flash Caches against EMC VNX arrays or the high-end V-MAX. That's annoying. We could imagine EMC and NetApp both running SPC-1 benchmarks but refusing to submit results to the SPC-1 council until and unless they have category-winning scores. Why would their respective marketing departments countenance submitting results showing that their products are second rate in SPC-1 terms?

There is another obvious missing product: IBM's XIV array. Maybe its performance in SPC-1 terms leaves something to be desired?

Look out for fresh SPC-1 results at the high-end and mid-range as both EMC and NetApp present their latest flash-enhanced arrays, but only if they are winners. ®