Plummets toward Mojave with tail pointing straight up 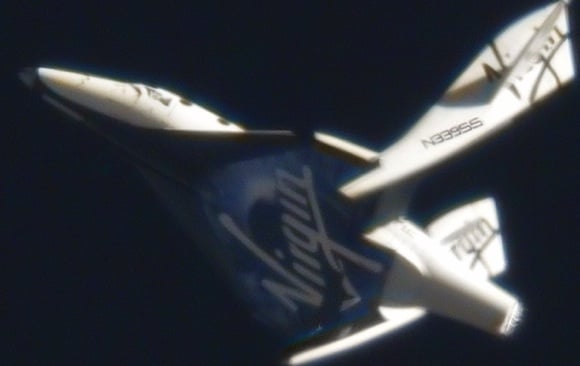 On reaching an altitude of 51,500 feet, the rocketplane dropped away from the mothership and "feathered" its twin tails upward by 65 degrees. This is the configuration the VSSs are designed to use when re-entering the atmosphere at much greater heights in future.

Feathering is intended to offer a completely stable hands-off descent, requiring no fly-by-wire systems: the high drag generated by this "shuttlecock"-like flight regime combined with the craft's low weight is expected to mean only minimal heat generation during re-entry and thus allows the craft to dispense with thermal shielding or tiles. In operational service the ships will cease feathering and restore their tails to the normal horizontal position while still above 70,000 feet before gliding down to a runway landing.

In yesterday's test, however, the VSS plunged rapidly and "almost vertically" through nearly 20,000 feet in just over a minute before un-feathering at 33,500 feet. Test pilots Pete Siebold and Clint Nichols brought their ship in to a "smooth" landing at Mojave 11 minutes and 5 seconds after release from the mothership almost 10 miles up.

"The spaceship is a joy to fly and the feathered descent portion added a new, unusual but wonderful dynamic to the ride," said Siebold after the flight.

The SpaceShipTwos and their jet mothercraft are being built for Virgin by the famous company Scaled Composites, which made the Ansari X-Prize winning SpaceShipOne of 2004 and which has worked on various US military projects both known and – it's thought – unknown. The setup of Virgin Galactic was announced shortly after 2004's X-Prize triumph.

At the time Virgin expected to have its suborbital thrillride service running by 2007. Now four years past that deadline, the new suborbital birds have yet to fire up their tyre rubber and laughing-gas fuelled rockets: all flight tests so far have been unpowered glides.

The VSSs, once they go into service, will be spaceships of a sort in that they will briefly soar above the atmosphere: however some might quibble with the billing as they will be unable to actually deliver anything or anyone to any place off Earth. They cannot achieve orbit.

On the other hand, the project might be a stepping-stone to greater things, and in the meantime a $200,000 Virgin Galactic ticket is a hell of a lot cheaper than a proper space-tourist seat on a real orbital rocket (generally well north of $20m, if one is even available). ®