According to ZDNet's Mary-Jo Foley, who cites anonymous sources, Cameron had a leaving do at Microsoft on Wednesday.

However, both Cameron and Microsoft have so far remained silent about his decision to move on from the company.

The Register has asked Microsoft to confirm Cameron's resignation, but we've yet to hear back.

The digital ID expert hasn't updated his blog since 21 April, and is yet to announce his departure on LinkedIn, Twitter or via any of the other Web2.0 ways adopted by many tech stars to reveal their break-ups.

As noted by Foley, Cameron appears to have quit on the same day that Microsoft's Windows Live division confirmed plans to support OAuth 2.0 in the next version of its Messenger Connect developer platform.

France-based Cameron joined Microsoft in 1999 when it acquired ZOOMIT, where he had worked as that's company's technology veep.

Cameron's apparent exit follows Dick Hardt's decision to leave the firm in early 2010, after joining Microsoft as a partner architect working on consumer, enterprise, and government identity problems in December 2008.

Microsoft, meanwhile, is presumably feverishly searching for Cameron's replacement and perhaps more ominously, according to our sources, is undertaking a big shake-up of the identity access group with at least two important men, Lee Nackman and Craig Wittenberg, said to have been sidelined. It's also unclear who will now steer development of Redmond's U-Prove cryptology technology, which the company bought in March 2008. ®

Microsoft declined to comment on this story. Meanwhile, it looks as though Microsoft wants to hire "proven top development talent in the areas of identity and access, directory, and cloud platform services (PaaS)." (Our emphasis). Assuming that is, that MS technical fellow John Shewchuk's LinkedIn page isn't out of date. 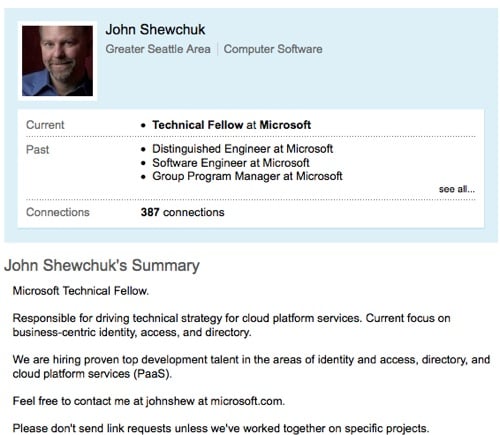