It is not enough in this world to be for something. You also have to be against something. And if one message was delivered by Red Hat's top brass at its eponymous Summit in Boston this week, it's that the company is for open source and openness and that it's absolutely against Microsoft and VMware.

Those of you who are Red Hat customers out there in the world may not be aware of this, but you apparently joined an army. Or, at least that is the way that General Hugh Shelton, the former commander of the 82nd Airborne Division and the former Chairman of the Joint Chiefs for the US military, thinks about it.

And that, aside from him being a Tarheel from North Carolina like Red Hat itself, is probably one of the reasons that Red Hat chose Shelton to be chairman of its board last August.

As it turns out, the general had some experience with Linux, and way ahead of a lot of corporations and way before he joined the Red Hat board in 2003.

Back in 1994, when the US lead a peacekeeping mission to Haiti to restore President Jean-Bertrand Aristide to office after a military coup in 1991. Shelton told attendees during a keynote this week at Red Hat Summit that the White House wanted data gathered up during the peacekeeping mission in some format or another, and whatever software was being used by the military forces in Haiti, the format was not compatible with what the White House required. An IT tech from the Air Force went home that night and hacked together a Linux system that could provide the data in the format that was required.

"I don't know what this stuff is," Shelton recalled thinking after his first brush with open source back in 1994, "but I want to know more about it."

"We won't get there until we eliminate some of our fiercest competitors," Shelton said emphatically. "Yes, yes, we are here to win."

We can't assume this is a battle won

Jim Whitehurst, Red Hat's president and CEO, followed the general on stage for his keynote, and painted a slightly different picture of the open source movement, relating it to the ongoing political uprisings in the Middle East after decades of oppression.

"People want to choose their destinies," Whitehurst explained. "They are demanding transparency, and they are demanding openness. It is no surprise that these things are happening now, and simultaneously."

The gist of Whitehurst's argument is that open source technology has spawned a wave of collaborative technologies and the growth of the networks that link us together, and that this technological revolution is enabling the political revolutions. And more importantly, it changes the expectations among citizens for how they expect to interact with their government and for people as they interact with each other.

"This is still playing out. There are very strong forces working against openness and transparency. We can't assume this is a battle won."

At that point, Whitehurst was not just talking about politics, but also open source software, and more specifically, how cloud computing might – or might not – evolve in the coming years. 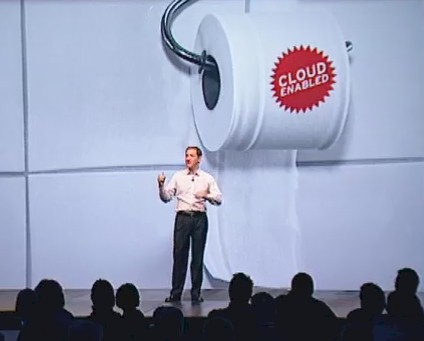 Like everyone else, Whitehurst complained about the hype around cloud computing. (Just like people used to complain about the hype around Linux more than a decade ago, which made Red Hat shareholders fabulously wealthy for a very short time in 1999.) "We need to get past all of this hype and we need to come back and talk about what we really mean by cloud and lay out a set of principles on which we move forward."

The army that Whitehurst sees leading the cloud revolution is not IT vendors, but end users. "We – IT vendors – are not leading it. This is the first time in IT that we have seen fundamental, massive, user-driven innovation," he said.

"These concepts were defined by people running big data centers And for the first time, because of open source, they could address it themselves. Without open source, clouds would not exist – full stop. But I think an important subtlety – and every vendor sees this as a big deal – is that this is something that customers want. Why? Because they are the ones who came up with it."

That may be overstating the case a bit, as is calling the creation of virtualization and Web-based applications and the other components of cloud computing driven by end users.

Maybe Red Hat thinks of Google and Yahoo! and eBay as an end user, but for most of us, they are a service provider, which is almost as bad as an IT vendor. That said, cloud computing does offer an opportunity for more flexible application delivery and business models, and that is clearly something both vendors and people alike want.

Next page: Openness is a funny kind of thing
Page: