Some things don't just add up

It's a market, but not as we know it

What they are referring to in "carbon price" is really a legally-mandated wholesale minimum price for energy. Chancellor Osborne introduced one in March, after much lobbying from energy companies with bets in nuclear and eco.

But the biases show. Renewables receive a capital cost discount rate of 10 per cent. By 2030, the committee says, "there are plausible scenarios where these other renewable technologies (eg, offshore wind, marine, solar) have become cheaper than fossil-fired generation" ... but there's a catch. The renewables would require a carbon price of £70 per tonne of CO2.

What does this mean? It effectively stops cheap energy being sold on the market, and makes energy much more expensive than it otherwise would be – thus adding to the cost of food, products and services. The Treasury says this is needed to add "support and certainty for low-carbon investment". Last month the UK pledged to introduce a floor carbon price of £16/tCO2, rising to £30/tCO2, which nevertheless adds a £9.3bn burden to UK business, according to analysts.

The Wise Men beg to differ.

"We estimate that the cost of supporting renewable electricity to 2020 will add up to 2p/kWh to the electricity price, increasing the average annual household electricity bill by around £50-60 in real terms," we learn.

Which is then contradicted a few PowerPoint™ bullet points later, when the Committee claims:

"Delivering renewable heat ambition will not increase energy bills under the current financing approach. It could require fiscal support of the order of £2bn a year by 2020."

So something plainly doesn't add up. 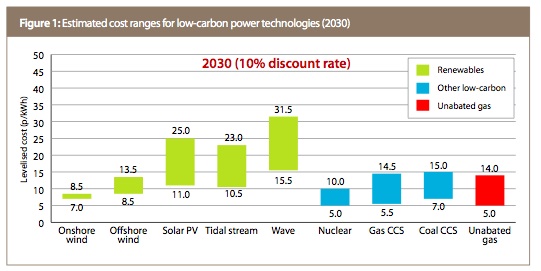 In summary, we know that the current batch of renewables are technologically inefficient, and therefore produce much more expensive electricity that technologically superior alternatives. To maintain their competitiveness, these renewables need both a "floor price" prohibiting us from benefiting from cheap energy innovations (such as shale or in the long-term, synthetic replacements for hydrocarbons) – which means the public pay much more than they should – and tax subsidies.

As even George Monbiot has noted, this logic produces a wealth transfer from the poor to the rich. Already, one in six households in the UK is in "fuel poverty" (or one in four households in Wales). In an age of cheap energy, this is one hardship that is completely unnecessary. By 2030, you'd be more likely to find a climate change advisor swinging gently from a lamppost, than competitive renewable energy. Committees of wise men and other bureaucrats can make recommendations – but politicians, who must implement the policies, have to face real voters.®