Since witnessing Princess Leia send Obi-Wan a holo message in Star Wars, I've dreamt of getting my hands on such a gadget. Perhaps even more so than Carrie Fisher herself. Decades later and unlike dated tech and ageing film stars, the concept of hologram communication hasn't lost its excitement. But for how long will it continue to rouse? It may have seemed completely implausible in 1977, but in this modern metropolis of machine, the construction of such tech is merely round the corner. 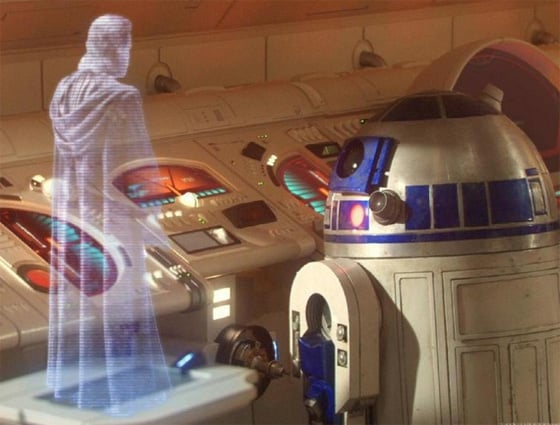 Technical limitations have meant holography has always been limited to pre-recorded videos, such as Prince Charles's appearance at 2008's World Future Energy Summit. This is also changing.

In an interview with The Telegraph, Ian O'Connell, director of Musion, a company specialising in real-time holography said: “This is cutting-edge stuff. One of the main uses we envisage is celebrity cameos at big conferences or concerts… It’s going to need a room that can accommodate the screening and delivery technology. But I think we’re five years away from holograms being a ubiquitous, affordable tool.”

That statement was made two years ago. I patiently rub hands in anticipation. In all likelihood, holography would emerge as another 3D tech, widely slated, over-priced and completely unnecessary. At least you wouldn't have to wear stupidly oversized glasses, though.

Still, the day such tech becomes a commercial product small enough to fit in my pocket, is the day I sell my house, car and girlfriend to pay for one. In reverse order, of course.

Time to give you a Woody. Don't get too excited, we're talking movies here.

The Orgasmatron from Woody Allen's 1977 film Sleeper, is probably the greatest sexual pleasure device ever imagined. Even the fertile Italians would want one. Blowup dolls, honeypots and phallic-shaped weapons of ass destruction would be made redundant in an instant. 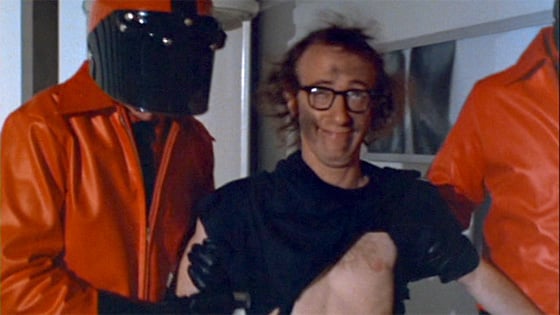 The concept is hardly original, though. From Durand Durand's pleasure machine in Barbarella to the sex-ray in Flesh Gordon, instant orgasm tools have always been on people's mind, especially men. As the late great Bill Hicks pointed out, it doesn't take much for a sexual thought to arise. Therefore the concept of an instant orgasm device, has probably been around since the beginning of time.

Arousing ourselves with an electronic machine is, as you know, hardly uncommon. However, an Orgasmatron is so superior to an average sex-toy, the comparison is futile. For $3000, surgeons will insert electrodes near the spinal cord and connect you to a function generator. This medical Orgasmatron, invented by Dr. Stuart Meloy, could be used to treat sexual dysfunction in women.

Would a walk-in orgasm room be something we openly embrace, or would it be seen in the same way a vibrator is? If it was our only method of reproduction, then of course we'd unashamedly have one in the corner of our living room. However, with current mindsets, the Orgasmatron would probably need to be small enough to fit in the back of a sock drawer. It would have to be more like The Orb, a separate pleasure tool from the same film - although I'm not sure we'd be passing it round a circle fighting over who uses it next.

Next page: Peril Sensitive Sunglasses - The Hitchhiker's Guide to the Galaxy
Page:
Tips and corrections
119 Comments