Upstart multicore chip maker Tilera is using the Interop networking trade show as the coming out party for its long-awaited Tile-Gx series of processors, which top out at 100 cores on a single die.

The company is rolling out the Tile-Gx processors, which it first revealed back in October 2009, at Interop in Las Vegas this week because the first instantiation of the Tile-Gx chips that is coming out the door is aimed specifically at the network equipment makers who have been early adopters of the Tilera chips.

Tilera is changing to a three-prong attack on the chip racket with its third generation of chips, Troy Bailey, vice president of marketing at the chip maker, tells El Reg. Rather than make one set of processors aimed at all potential customers, as it did with its first-generation Tile64 and second-generation TilePro chips, Tilera is going to offer three different families of Tile-Gx chips aimed at three different customers: the Tile-Gx 8000 series for network equipment makers, the Tile-Gx 5000 series for multimedia appliances, and the Tile-Gx 3000 series for hyper-efficient servers.

"Rather than having one-size-fits-all, we now have different style of products," explains Bailey. "Some applications need a lot of memory or I/O, and other applications do not need it."

It is not clear if Tilera is actually going to fab three different flavors of the chips – and Bailey was not at liberty to say – but given how expensive it is to design and test chips, it is safe to assume that what Tilera is really doing is being smart about Tile-Gx chips as they come off of Taiwan Semiconductor Manufacturing Corp's 40 nanometer fabs. There really are four different Tile-Gx chips – squares with 16, 36, 64, and 100 cores as well as different amounts of on-chip system components. That is enough variation to have to pay TSMC for.

So it stands to reason that what Tilera is doing is using partial duds where there is a booger on a crypto unit or a memory controller or what have you for a workload, such as a server, which may not need as many or none of these components. This is the way all processor makers "improve" their chip yields, and Tilera, having packed so many components on its system-on-chip designs and aiming at three different markets, can take it to extremes. As it is with core counts.

The Tile-Gx design has a mesh network linking all of the cores together as well as linking the 256KB L2 caches per core into a single coherent L3 cache. Each core also has 32KB of L1 data cache and 32KB of L1 instruction cache. So on the 100-core variant of the chip, there is 32MB of total cache for the data to frolic within. It is widely believed that the Tilera cores are based on a licensed version of the MIPS core, with the third-generation Tile-Gx chips sporting 64-bit processing but only 40-bit memory addressing, Bailey revealed to El Reg. That means the top-end part can address up to 1TB of DDR3 main memory, and interestingly, the Tilera processors will be able to run that memory faster than their cores, unlike most other processors.

The Tile-Gx chips also have additional SIMD instructions that make use of a four multiplier-accumulator (MAC) per cycle unit that can deliver 600 billion MACs per second, which Tilera says is 12 times the fastest digital signal processor on the market when the design was launched in late 2009. The chips also have two MiCA engines, short for Multistream iMesh Crypto Acelerators, and are able to deliver 40 Gb/sec of bandwidth on cryptographic work and 20 Gb/sec on compression and decompression jobs. 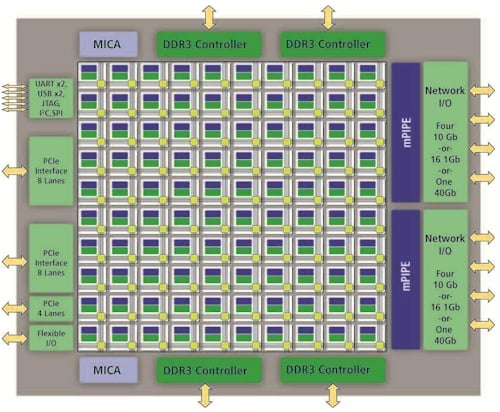 The 100-core variant of the chip is a 10x10 grid of cores all linked by the iMesh. Four memory controllers are along the top and bottom edges (two on top, and two on the bottom). The MiCA crypto units are in the left-hand corners, and three PCI-Express 2.0 I/O processors (two eight-land and one four-lane) and various I/O controllers are there, too. (With a total of 80 Gb/sec of PCI-Express I/O bandwidth). The right-hand side of the chip has eight XAUI ports that can be configured as a total of 32 Gigabit Ethernet ports or eight 10 Gigabit Ethernet ports. Because everything needed in the system is on the Tile chip, there is no northbridge or southbridge chipset. It is a very elegant design.