Comment A file-sharer made mitigating pleas of mental illness when she pleaded guilty to copyright infringement in a Scottish Court this week.

54-year-old nurse Anne Muir pleaded guilty to sharing £54,000 worth of songs over P2P after an investigation by the BPI and IFPI. But her defence lawyer argued that – in mitigation – she was suffering depression and had low self esteem, as well as having some obsessive-compulsive traits. She admitted to downloading 30,000 songs – in order to build up her self-esteem. She was found with over 24,000 karaoke songs on her PC, and almost 8,000 tracks.

"Learning this new technology and picking up new skills gave her self-esteem a boost. But to be allowed into the network she had to have a certain number of files already," her lawyer argued.

The Pirate Party UK supported this.

"It is disgraceful that Mrs Muir should have been so pursued in such an aggressive and potentially damaging way, rather than given the support she needs in this difficult time," said the Pirate Party's Laura-Anne Riach.

Quite right: social services should step in. Muir should have been given free songs to cheer her up, forgoing the 79p per song demanded by the tyrannical copyright industries and their heartless, jackbooted henchmen.

Low self-esteem and obsessive compulsive behaviour? None of this will be news to anyone following a copyright discussion online.

I was intrigued to find this comment left by a poster called "Rancidpunk", urging the formation of a UK Pirate Party. It exhibits many of the symptoms:

Rancidpunk's YouTube channel includes a mash-Up celebration of Pirates called I Can't Get No GIRLS. I hope I'm not labouring the point.

And the pictures offer further clues. 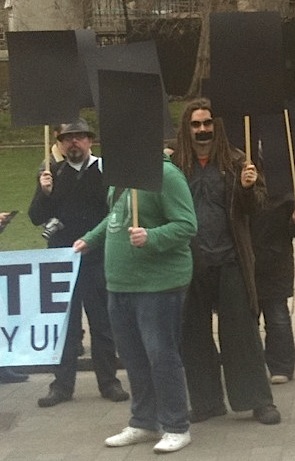 A sure sign of an obsessive is a 2,000-word comment that appears below a story. With copyright-related stories, one of these can be guaranteed to appear appear within minutes. They only ever come from one side.

Of course, there's real oppression, then there's having to pay for music you want to keep. You can listen to almost anything for free, anyway, thanks to YouTube.

Your reporter's view is that file-sharing is a real joy – that should be legally available. The music industry should concentrate on innovation, and delighting the substantial majority of us who are prepared to pay with new services, as its Number One priority. But it's their stuff, and they're entitled to go after the odd idiot who is too selfish to pay, or too stupid to know the law, if they want to.

One music writer friend of mine attended the small "Open Rights Group" demonstration at Parliament last year, and having taken a look at the assembled huddle, discovered a positive side to internet disconnection.

"Disconnection would be the best thing to happen to some of these people," he told me. "They'd get out the house, meet girls, and go for a walk."

Maybe this could work for 54-year-old nurses, too? ®