Would putting all the climate scientists in a room solve global warming... 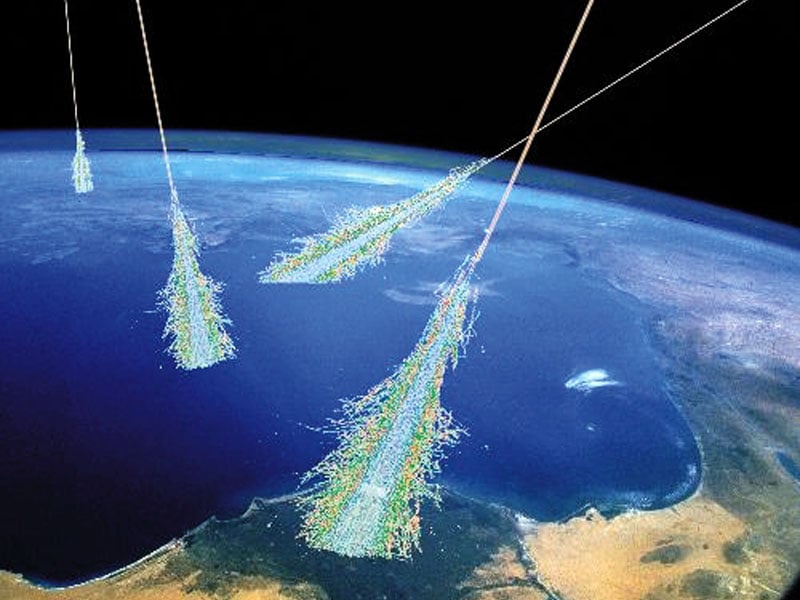 The director of Sun-Climate Research at the Danish national space institute DTU Space, Henrik Svensmark, was next. Svensmark explained the idea that cosmic rays have a much greater role in climate than previously thought – one we have mentioned before, here. The theory led to the CLOUD experiment at CERN.

The proposition is that high energy particles released from cosmic rays hitting the atmosphere – particularly muons – provide the seed material for clouds, via ionisation. So if more cosmic rays reach the atmosphere, there are more clouds, which generally means a cooler climate. (On balance, that is: high clouds have an albedo effect, and nighttime temperatures are raised by low clouds). The amount of cosmic rays that reach earth is determined by the density of the cosmic rays, and the strength of the earth's and sun's magnetospheres, which act as umbrellas.

The "shower" illustrated by the NASA artist above is a bit misleading. The true picture is much denser than it suggests: around 12 million muons pass through a human body in 24 hours, noted Svensmark.

The net cooling effect of clouds is 30W/m2, which is much greater than any of the figures mentioned above. So small changes in clouds will have significant impacts on temperatures. He explained the process of cloud formation, via UCNs (Ultra Fine Condensation Nuclei) which seed clouds. Over the past 15 years, experiments have been conducted to find out the ionisation effects of cosmic rays at varying altitudes. Svensmark isn't involed in the largest of these, CLOUD.

Svensmark has alluded to this before. The idea is that the Pacific Oscillation undergoes periodic "shifts" – and the shift in 1977 had significant consequences, with a period of rapid warming following. The idea that something dramatic happened to the Pacific in 1976, isn't new, and has been explored in this paper, and biologists note how rapidly plankton responds to these shifts.

"If regime shift is ignored, the net AG contribution increases by 2x to 5x", said Svensmark.

The afternoon saw some fiery exchanges. Australian geologist Ian Plimer spent a lot of time on CO2 emissions from submarine volcanoes, which he said are not measured. Andrew Watson said his team could measure oceanic CO2 emission to 1ppm, and the output was negligible about 1km away. Plimer said he wasn't looking before and after eruption.

Plimer was convincing on the long-term geological record.

"I would like to see why 3 per cent anthropogenic CO2 drives climate, and the other 97 per cent doesn't". The official answer is that the 97 per cent of natural CO2 is perfect equilibrium, but the wicked (fossil fuel) 3 per cent tips everything out of balance.

"For people to call me a Climate Change denier is a demonstration of public ignorance – geology is all about change – it's the science of climate change," he said.

Concluding the science sessions was one of the most senior figures in the Climate Industry, John Mitchell of the Met Office. Mitchell was review editor of Chapter 5 of the IPCC's most recent report (AR4) but hasn't been able to meet FOIA requests, despite the IPCC's pledge to keep all written expert comments on record for five years. "For my own part, I have not kept any working papers. There is no requirement to do so, given the extensive documentation already available from IPCC," Mitchell has claimed. This, like Climategate, was not mentioned.

Mitchell's contribution was a mixture of the sophisticated and the simple. He rebutted the idea that you could not model a chaotic system and come out with anything useful. Obviously there's plenty of maths that begs to differ, and Mitchell mentioned some of it, such as Lorenz. Other arguments were odd: Mitchell used the examples of Mars and Venus – two planets which don't have biospheres. This example may prove that there's a greenhouse gas effect – but not much else. And it wasn't seriously in doubt.

"People underestimate the power of models. Observational evidence is not very useful," he said. "Our approach is not entirely emprical."

From the audience, Professor Michael Kelly, who served on the Oxborough Report, wasn't impressed with the thoroughness of this.

Referring to using parameters as variables, Kelly said: "It strikes me as what you're doing is what we did in solid state physics in the 1970s, which wasted a lot of time. We didn't go back to our modeling as we should have, because it produced the right results. We quit while we were ahead."

It was nearing 5pm, and a long session loomed on the economics of climate change with Czech President Vaclav Klaus, and former Chancellor Lawson, which I was unable to attend.

The audience had been good enough to heed Howard's opening advice that "if anybody mentions Climategate, they'll be evicted". Nobody ambushed the CRU crew all day - it was all very polite. I noted that the skeptics made a point of listening politely to the warmists, and applauding them all. A group of students and a few others, simply giggled and mocked the skeptics, however from start to finish. One of their tutors (I presume) was in hysterics all day. I wondered why they had attended at all.

So the disagreements really break down into two. There's the science: human influence is either significant or not so significant; and there's economics: we must have policies which make drastic changes to society, lifestyles and industrial policy – what George Monbiot called "a war against ourselves" – or we must sensibly adapt, and are foolish to create more unnecessary human poverty and misery when we don't need to.

This isn't so surprising, really. The most passionate believers in the view that man is irreparably changing the climate are the people with the long lists of radical remedies already prepared; their politics needs the catastrophe, for nobody would entertain their politics for a moment – it wouldn't be mainstream – if it didn't come with a catastrophe attached. Take away the catastrophe, and their politics collapses like a house of cards. Politically we're in a sort of limbo: a few countries have pledged themselves to the course of radically changing lifestyles and industrial policy – but the price of implementing them is political suicide. Things meander along without resolution.

The day ended with as much disagreement as it had begun, and it felt for much of the day as if two Navies had passed in the night. But it had at least taken place. Much credit to Alan Howard and the Howard Foundation for arranging it. ®