Unless you enjoy eternal fan noise

Updated Expanding on its efforts to remove all user control over the innards of its iDevices, Apple appears to have made it difficult to swap out the hard drive in its latest line of iMacs without finding yourself listening to screaming, interminable fan noise.

In a posting on his company's blog, an Other World Computing rep says that Apple has changed the standard four-wire SATA power connector for the new iMac's internal drive to a proprietary seven-wire config.

That's annoying enough, but the wizards of Cupertino have also decided to manage drive-temperature control through a combination of that cable and firmware in the drive itself.

"From our testing," the blog post reads, "we've found that removing this drive from the system, or even from that bay itself, causes the machine's hard drive fans to spin at maximum speed and replacing the drive with any non-Apple original drive will result in the iMac failing the Apple Hardware Test (AHT)," a software staple of Mac troubleshooting for over a decade. 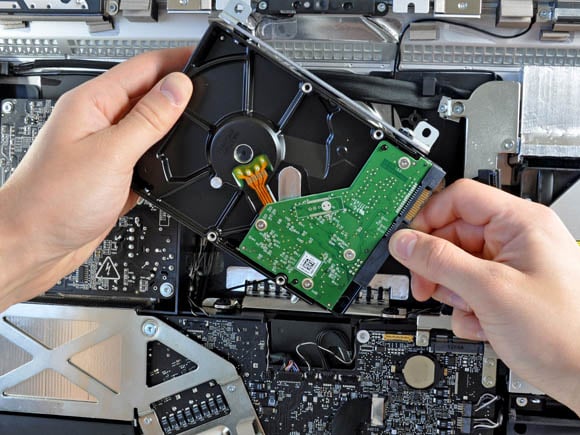 The implications of this change are annoying in the extreme to fanboi tinkerers. Should you want to upgrade your iMac's internal drive with a larger one, or should that drive happen to fail, you are S.O.L. – you'll need to go to Apple for repair unless you enjoy listening to screaming fan noise 24/7.

It's possible, of course, that OWC, iFixit, or some other worthy may eventually come up with a workaround – but considering that part of the problem is in the drive's proprietary firmware, such a workaround will be a difficult one, indeed.

As OWC's blogger reminds us, back in 2009 the iMac was "upgraded" in such a way that if you swapped its internal drive with one from a different manufacturer, Apple's hard drive temperature sensors would stupidly cause the drive-cooling fan to constantly run at top speed.

Workarounds to the 2009 annoyance soon surfaced, but the fact that they were needed at all was an insult to users who prefer to get inside their machines and swap a component as straightforward as a hard drive.

Now Apple has made iMac hard-drive replacement even more difficult.

Since that blond, red-running-shorts-wearing young lovely with the enormous ... uh ... sledgehammer smashed Big Brother's face in Ridley Scott's famous 1984 commercial, Apple has had a love/hate relationship with users' ability to upgrade their machines.

For example, upgrading the pitiful 128KB of RAM in the original Macintosh took a steady hand on a solder gun. The Mac had no expansion capabilities to speak of until the Mac SE and its PDS expansion slot appeared in March 1987.

Macs became more upgradeable as time went on – NuBus, anyone? – although such models as the Power Mac 9500 were notorious for splitting fingernails and scraping knuckles. The drop-down doors of the Power Mac G3 and its follow-ons were a welcome change, and the Power Mac G5 was arguably the most easily upgradeable Mac of all time.

But those were Apple's "pro" machines. Over on the consumer side, it has taken some degree of tech savvy to swap the guts inside iMacs ever since the the bulbous Bondi Blue was introduced in 1998.

And as for opening up and upgrading iOS devices? Well, it's certainly possible to do simple battery replacements, as iFixit and other have shown, but it's not something for grandma or shaky-handed Uncle Billy.

But with the release of the 2011 iMacs, Apple has taken another step towards a fully sealed, proprietary, non-user-upgradeable system – which is a bit of a shame, because the new iMacs come apart rather easily.

Larry O'Connor, founder, president, and CEO of Other World Computing, got back to us on Saturday with a bit more information about the new iMacs' challenges, and pointed us to his own 2,000-word posting on the OWC blog.

In that missive, he scrupulously details OWC's testing of various drives in the new iMac, which essentially confirmed the conclusion of the original post by OWC's Michael Perry, which said that replacing a 2011 iMac's internal hard drive with a drive not provided by Apple specifically for that series will break Apple Hardware Test and cause the fan to ramp up from a base level of 1,100 rpm to 5,600 rpm over time.

O'Connor also provides in his post a section entitled "Possible Solutions", which he wisely characterizes as "*NOTE – NOT FULLY TESTED/Approved/Recommended, etc.*" Among his suggestions is to short the lines that carry the drive-temp info – but as he sensibly points out, "a consequence could ensue for obvious reasons." He also mentions HDD Fan Control which works with a drive's SMART interface to control fan speed.

Finally, in his email to The Reg, O'Connor writes: "This isn’t going to stop our own iMac upgrade program, etc. Also, and important to note... This issue has zero impact on adding a drive to the SSD bay."